Took a wander down to Trafalgar Square tonight in search of the candlelit vigil against hate crimes. It wasn’t up to much, but the fountains were lit up all pretty, changing colours. My camera doesn’t take very good night photos, but here’s a few. 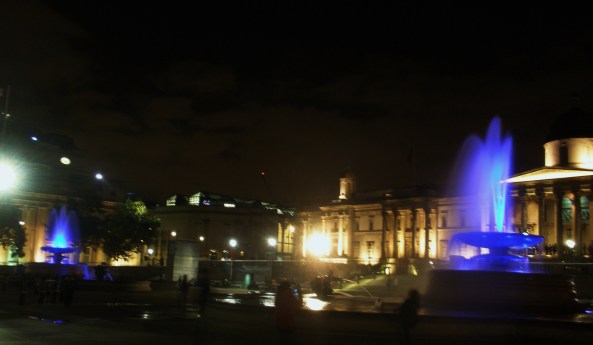 Although the vigil (that I didn’t see) was not meant specifically for Ian Baynham, the 62-year-old who was killed by a bunch of teens near Trafalgar Square this week in a homophobic attack, it is worth writing that arrests have now been made regarding that incident. It’s truly appaling that something like that could happen at all, let alone in the middle of London’s tourist district during the busy night life hours. Ian was out celebrating the start of a new job and all the papers say his life was on the up.

And speaking of violence in the city, gun crime and rape are both up this year, 17% and 20% respectively, according to the BBC. On the plus side, I suppose, the overall number of crimes in the city fell by 1.2%….

2 comments on “Trafalgar Square: By Fountain Light and Candle Light”