Everyone knows that what makes a Cockney a Cockney is to be born within the sound of the Bow bells from St. Mary-le-Bow. But some also say that to be a true Cockney, you should also be born “within the sound of a toothless gentleman wearing a flat cap and slurping a bowl of jellied eels”.

The jellied eel tradition is still very much alive in the East End where it all began. The eels were easy to capture in the Thames and easy to take to market as well. Gordon Ramsey called them “The most challenging dish to prepare.” Want to give it a go? If not, you’ll find them served up in pie and mash shops like Nathan’s: Pie and Eels, where Barking Road meets Green Street.

Wandering the streets with my dad after a West Ham game on Monday, we stopped to marvel at the crowd gathered outside of Nathan’s and the delicate white-haired ladies serving up the traditional Victorian-era grub. They plopped mountains of mash and pie on plates and poured over a liquor sauce which is made from the water that the eels are boiled in.

Have you been brave enough to try jellied eels? Have you grown up on them? What do you think?

Here’s some photos I took the other day. 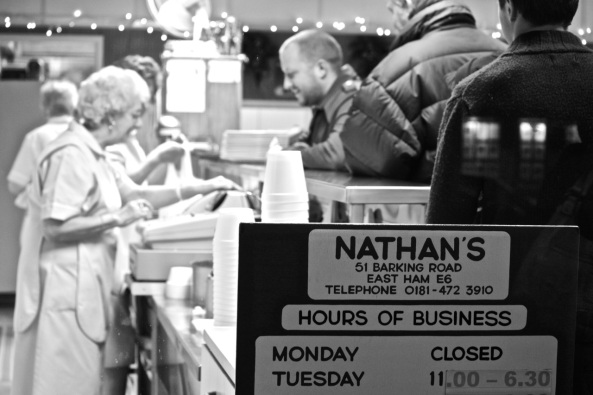 And a Gordon Ramsey take on eels…

6 comments on “Queuing at Nathans for Jellied Eels”