I’ve known the fabulous (and sometimes fabulously controversial) Sarah T Schwab since were were sophomores at university. We were both English and journalism students, both working on the campus newspaper and had a lot of other similar interests. When we graduated, I moved to London and Sarah to New York City. Over the years, she’s visited London quite a few times. Her last visit this side of the big old pond was in October, just before I went to see her in NYC. We found ourselves discussing the two mega cities we live in and all of their similarities and differences. Inspired, she’s written the following guest post for LLO. 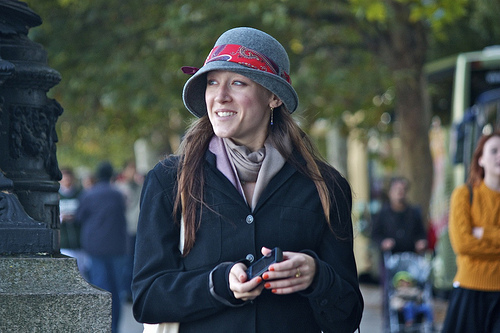 1) Tea/Coffee
New Yorkers drink 6.7 times as much coffee as do people who live in other major cities, according to Massive Health’s iPhone app, Eatery, which had users snap 7.68 million pictures of everything they ate over the course of five months. In contrast, Londoners simply adore their tea – it is said that five cups is the average amount consumed by people each day, with some people drinking up to 15 or 20. I think that the different drinks of choice say volumes about each city. A cup of tea has less caffeine than a cup of coffee; it’s meant to be sipped, not gulped: New Yorkers rush, Londoners rush too but may take more time to smell the roses, or wisteria, or whatever else is growing in their English gardens.

2) Buildings
At 1,250 ft (381 m) at the 102nd floor, New York City is home to one of the tallest buildings in the world: the Empire State Building. At the time of its completion in 2013, One World Trade Center will be the third-tallest building in the world by pinnacle height, with its spire reaching a symbolic 1,776 feet (541.3 m).
In comparison, London’s tallest, The Shard, stands at 1,016 ft (309.6 m) at its 72nd floor.
This lone comparison of building heights is a good comparison for the way the rest of the city is built. Manhattan is an island wholly composed of very tall buildings. There are brownstones and six-story walk-up apartments too, but they’re typically nestled between their looming big brothers. By contrast London is famous for their shorter Georgian and Victorian houses. Most skyscrapers are isolated in the financial district.

3) Public Transportation
Underground: Whether one calls it the “tube” or “subway”, underground transportation is quite different. In London the latest tube is open until 1 a.m., whereas New York subways are open round the clock. Another difference is the seats. Perhaps it’s because of the high volumes of homeless and mentally unstable people roaming New York, but the seats are plastic. The tube’s seats are cushions made of moquette fabric, which is made from a wool nylon face with interwoven cotton backing.
One similarity between both undergrounds: annoying weekend construction leading to line and station closures or delays.

Above ground: Red double-decker buses have long been a staple of public transportation in London, largely due to the narrow roads and tight winding surface streets in city centers. Bus height averages about 14 feet tall. New York has articulated buses, which average 60 feet long (there are also shorter buses whose length is 40 feet). They are called “articulated” because the accordion-like bend in the middle lets this bus turn corners. There are some double-decker buses in the city, but you’ll only see tourists in them.

4) Wi-Fi
It’s fairly easy to find Internet cafés in London – one rarely has to walk more than a few blocks before stumbling on one with free Wi-Fi. Besides a friend’s apartment or random cafés in the Lower East Side, Starbucks seems to be pretty much the primary Wi-Fi cafe outlet in New York City.

5) Women
While traveling in Cambodia this past summer, I met a Londoner named Kier. “American women are so forward,” he said.
Studies show that the majority of college-bound American women aren’t searching for future husbands like they once were. They’re there to acquire the tools necessary to obtain a good job. Anything that might get in the way of that is an unnecessary hurdle (i.e. relationships).
In this month’s issue of The Atlantic magazine, the article “Boys on the Side” looks at the current landscape of the “hookup culture.” Author Hanna Rosin writes, “For college girls these days, an overly serious suitor fills the same role an accidental pregnancy did in the 19th century: a danger to be avoided at all costs, lest it get in the way of a promising future.”
Casual relationships happen all over the world. And of course it depends on the woman. But in general I think New York women are being socialized to tolerate a higher level of sexual crudity than other cultures, and are therefore not shy about taking what they want in comparison to those in some other cultures.

6) Penises
Although it is difficult to obtain definitive figures since there is no central agency requiring this, the Centers of Disease Control published a National Health and Nutrition Examination Survey (NHANES) in 2007 that found the overall rate of circumcision in the USA was 79 percent. In New York City, NYC HANES data shows circumcision rate to be 74.5 percent in US born men and 36.8 percent in men born elsewhere. In comparison, the 2000 British National Survey of Sexual Attitudes and Lifestyle found that only 16 percent of men older than 16 were circumcised.

7) Nightlife
The general closing time for pubs is 11 p.m. in London. If people want to continue drinking, they need to go to a club. Most New York drinkeries close at 4 a.m., whether they have a dance floor or not.

Advertising
New York City is notorious for its visual pollution. Granted the entire city isn’t like Times Square, but advertising is everywhere: buses, subways, taxis, even people act as walking, talking advertisements. The Shuttle from Grand Central to Times Square is always clad floor to ceiling with one prominent theme.
There is definitely plenty of advertising in London, but it’s much tamer and more limited to certain areas.

9) Street music
I saw more bagpipes during my recent five-day stay in London than I ever have in my life. And they were always on the street. In comparison, the saxophone can be heard everywhere in New York City: on street corners, in the subway, in Central Park.

I know there are plenty of New Yorkers living in London (ahem, Carolina, Lara, Stephanie, etc…) who read LLO (and probably some Londoners who have ended up in NYC as well). I’m curious to hear your comments on this and whether you agree or disagree!