Jay is the owner and director of Neighbourhood hair salon. Bringing a pocket of Shoreditch cool to Earl’s Court, Neighbourhood not only has a quirky interior complete with antlers and copies of Wallpaper magazine, it’s a lot of fun to get your hair cut there. Jay cuts mine, so I asked him to interview for LLO, of course.

Read on for stories about some of London’s diverse characters, some of Jay’s favourite places to hang out near Earl’s Court and which Londoner’s hair he’d most like to get his hands on.

LLO: Tell us a bit about yourself and your background.
JB: Although originally a northern lad, I mainly grew up in Essex – the style centre of the UK – but gravitated to London like most creative folk at the tender age of 17 to join Toni & Guy. I started London life in a dodgy bedsit in Willesden Green with an aging hooker, an alcoholic and a schizophrenic landlady who frightened the life out of me, but were genuinely the nicest people on the planet.

LLO: You opened your hair salon in Earl’s Court in 2009. Tell us a bit about the vibe of Neighbourhood. What’s its “personality” like?
JB: We originally opened the salon under the name of ‘Concrete’ but because of legal reasons were forced to change the name after our first year. So after a busy Saturday with a glass of wine, we all set to thinking of a new name, and I remember saying to the team: “The name has to be something that reflects all of our clients’ personalities in the neighbourhood.” Thus Neighbourhood was born, so its personality comes from all the colourful characters that made it really. 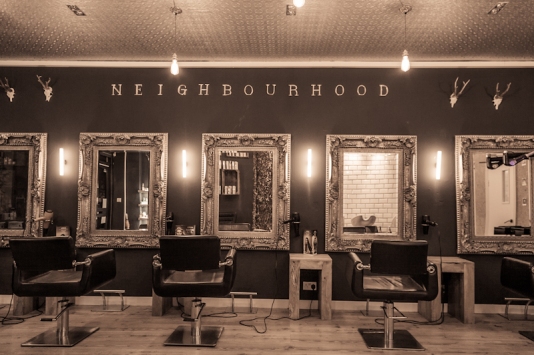 LLO: Tell us a bit about your clientele.
JB: We’ve attracted a really diverse clientele, mainly because I think people like the concept of going to a friendly local salon, and not necessarily just on a professional level, but with each other. More often than not, there’ll be laughter and banter going on between clients and I’ll stand back and think you’re a banker, you’re a single mum, you’re a singer and you’re a student all on the same level having a giggle. That’s pretty cool.

LLO: You must hear all the gossip from the area. Without giving away any names, what’s the best story you’ve heard recently?
JB: Blimey, I could write a soap opera on all that goes on in Neighbourhood, who’s linked to who, etc.. but I can’t divulge any recent stuff. We have a ‘what’s said in the salon, stays in the salon’ policy out of respect. My favorite though was a regular married couple who booked simultaneous appointments one Saturday morning, only to discover his mistress of six months sitting there having highlights, which no one knew about. It was definitely a ‘hide the scissors’ Jeremy Kyle moment  !!

LLO: What sort of products do you use in the salon?
JB: We’re are exclusively a L’Oréal salon, using Serie Expert, which is the salon professional range of shampoos, conditioners and treatments. They’re more cost effective than Kerastase. Last year we introduced the Innoa colour range into the salon, which are ammonia-free and are amazing. No smell, no stains and glossy, healthy hair after..

LLO: How long have you lived in Earl’s Court? Tell us about your favourite little gems within walking distance from the salon.
JB: I’ve been here for eight years now, and while it seems everything has shifted East, there’s some great little gems around here: The Devonshire Arms for chilled Sunday roasts with the papers or friends. Evans & Peel Detective Agency for lethally good cocktails. The Troubadour is also a bit of a gem, for chilling with a coffee, sharing a bottle of wine in their secret garden in Summer or watching a gig downstairs.

LLO: What was the biggest challenge you have had to face in setting up a business in London and how did you overcome it? Most rewarding aspect of your job?
JB: Probably my own naivety (ha ha)! After a lot of begging with the bank to get finance, negotiations on the shop lease dragged on for five months, so the entire loan was swallowed by three party’s solicitor’s costs. I literally had an empty shop without a penny to put anything in it, so it was furnished with eBay and a credit card. I also became a master builder, plumber, tiler, plasterer, decorator overnight. That was pretty rewarding, but I will leave it to the professionals next time!

LLO: Best place in London for food and drinks away from the tourist trail?
JB: The Betsey Trotwood on Farringdon Road, EC1, is the best hidden gem in London.

LLO: Which Londoner’s hair would you love to cut and why? What would it look like when you finished?
JB: Definitely would have to be Victoria Beckham! She’s a girl with her finger firmly on the style pulse, and whether you like her or hate her, clients copy her look time and time again. Maybe it’s time to edge her up a bit with a wig and see how many Twitter followers copy it overnight (ha ha)!

2 comments on “Listen to a Londoner: Jay Barrett”