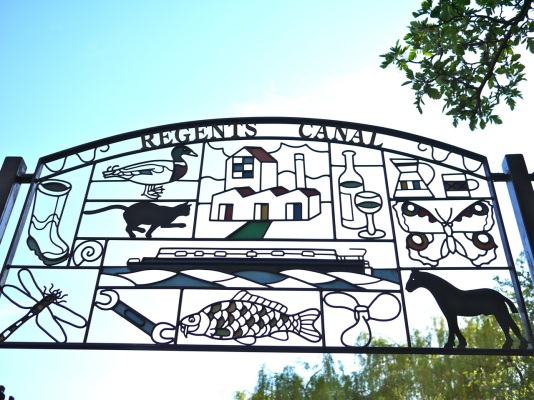 Read any article about houseboat living and you’re sure to stumble upon words like “idyllic lifestyle” and “romantic abode”. 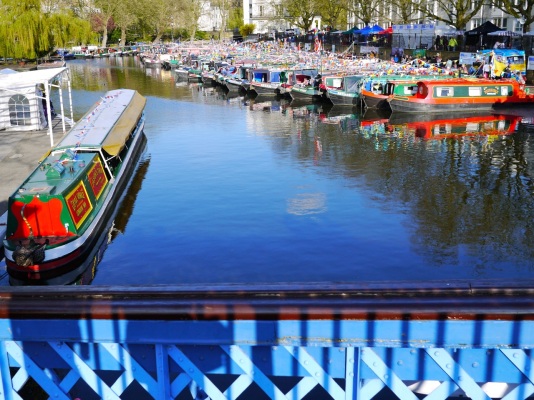 I’ve never been inside of one, but I love to walk past the narrowboats in London, lining the Regents Canal. 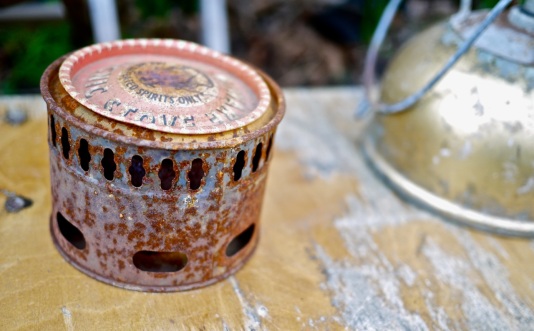 Jorge and I took a little walk down the canal path last weekend after our sunny, flower-filled walk through Regents Park. 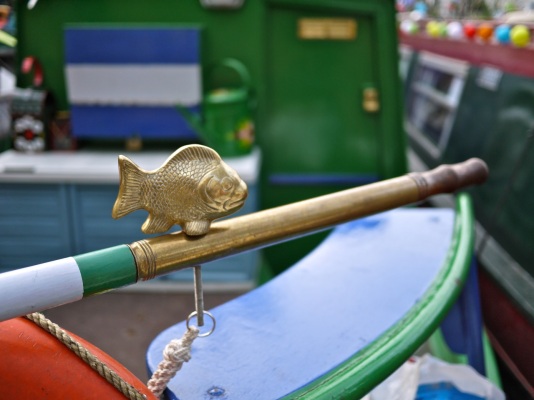 Cutting off from the park near the London Mosque, we headed down the canal all the way to Little Venice. 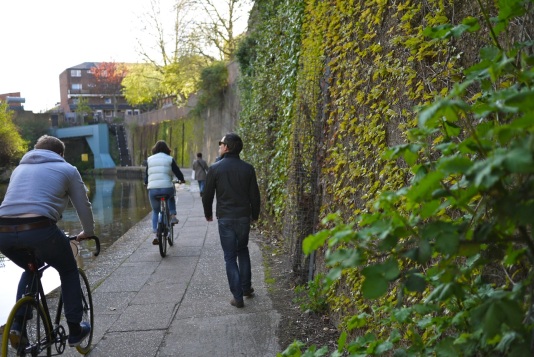 The decor on some of the houseboats is brilliant – rusty old watering cans, tacky pink flamingos, hand carved fish and old ratty boots filled with dirt and pretty plants. 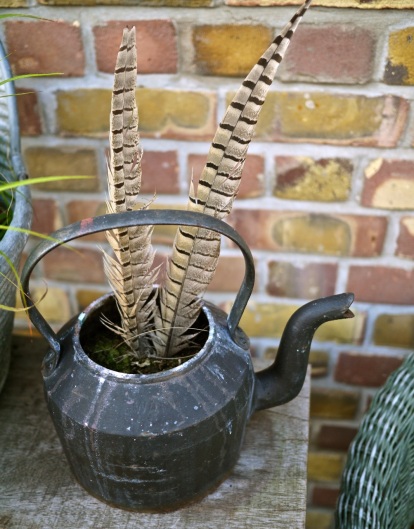 The boats are set up into little communities and I’m sure they probably have that vibe for those who live there as well. 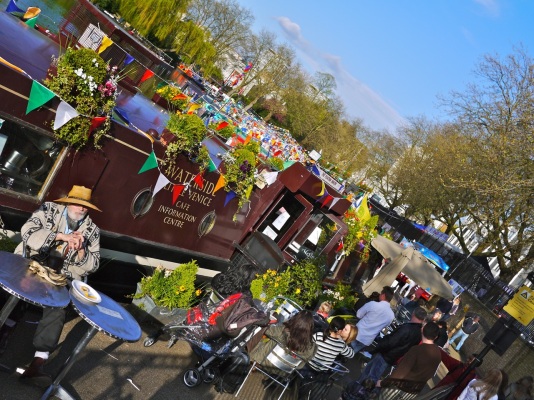 They’re quite quirky with fun names painted across the sides, smoke stacks or rooftop gardens, some with tiny grassy patches across the pathway and the creativity that is essential for living in tiny spaces. 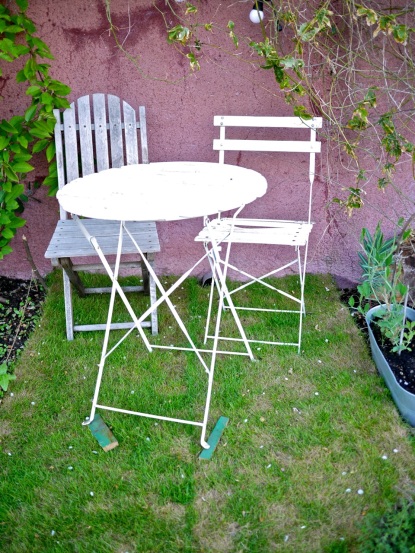 Some also show a good sense of humour. 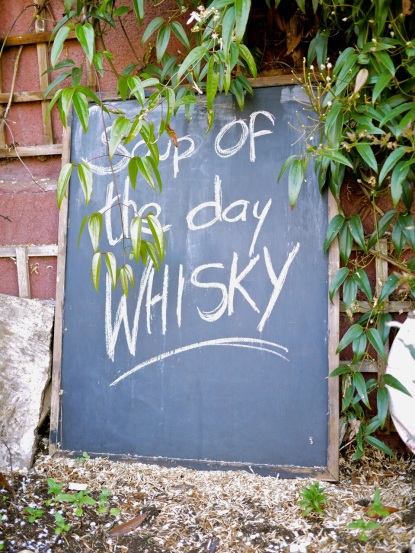 There’s often a cat hanging out by the entrance. 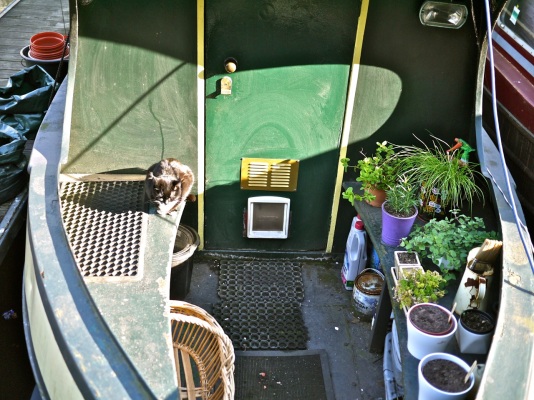 Many times residents and their friends are sitting on the deck around a table, living the life, chatting, drinking glasses of wine or eating sandwiches, sunglasses on, floating gently, relaxing. 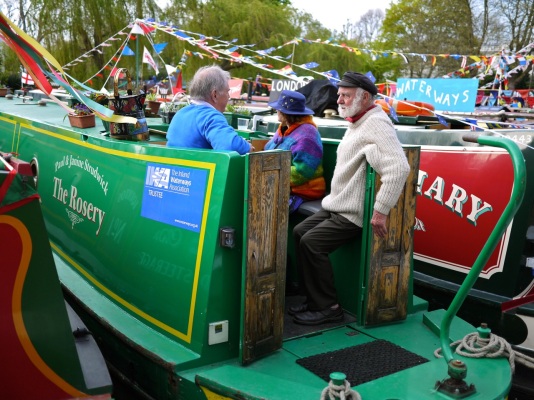 Other times, you see people washing their boats or doing some sort of maintenance. 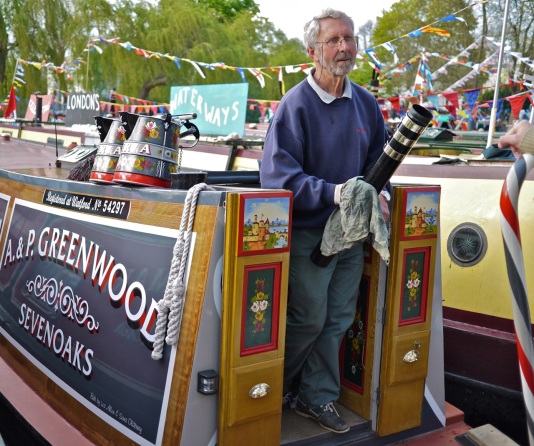 Though some of the communities of houseboats are pretty private, I’m not sure I’d like to live on one that touches a busy pathway like those near Broadway Market in Hackney. 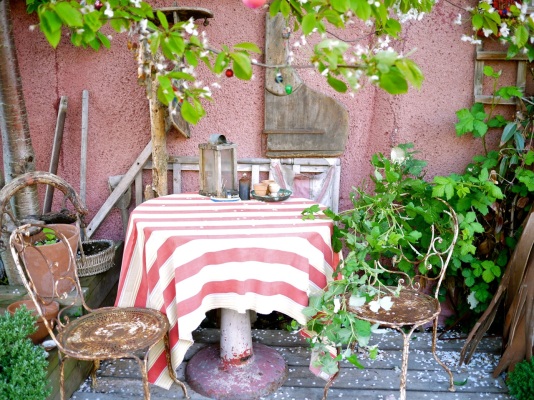 There are quite a few houseboat mooring areas in the city on the canal and the Thames from Chelsea to Canary Wharf, Hammersmith to Ladbroke Grove, Hackney to Little Venice. 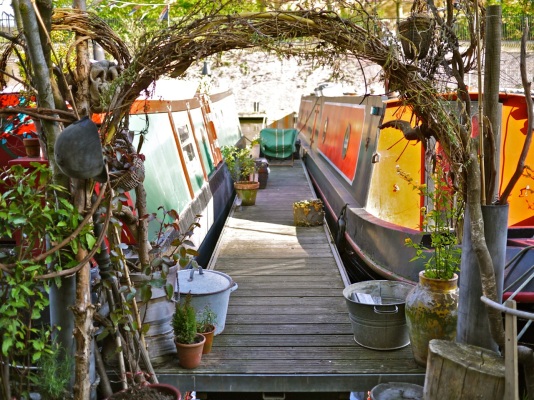 There was a festival of canal boats on at Little Venice the day we walked by – the Canal Cavalcade – so I took many of these photos there. 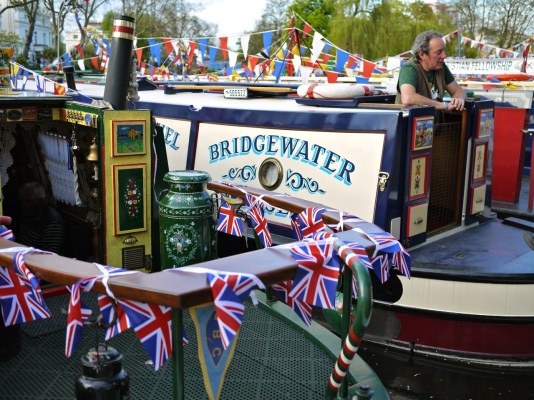 There was silly bunting everywhere to give it a sense of festivity and most of the doors were open so it was possible to sneak a glance inside. 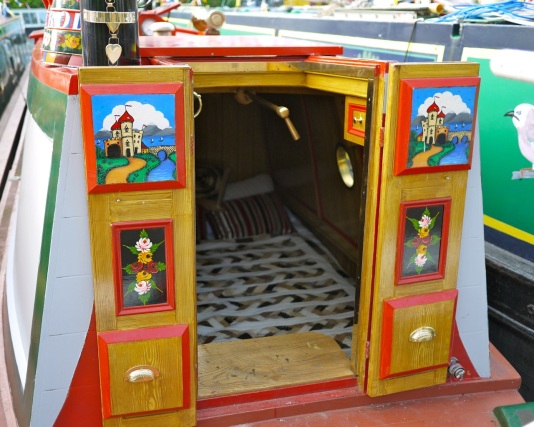 They are very decorative and intricate structures in most cases, full of little details and personal touches.

The residents must have a nice sense of freedom as they can just drift off down the canal whenever they like and not even leave home. 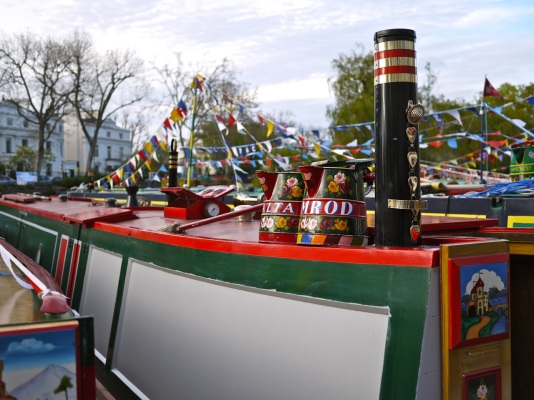 The Canal Cavalcade is an annual gathering that kicked off about 30 years ago and now attracts about 130 houseboats, morris dancers and artisans. 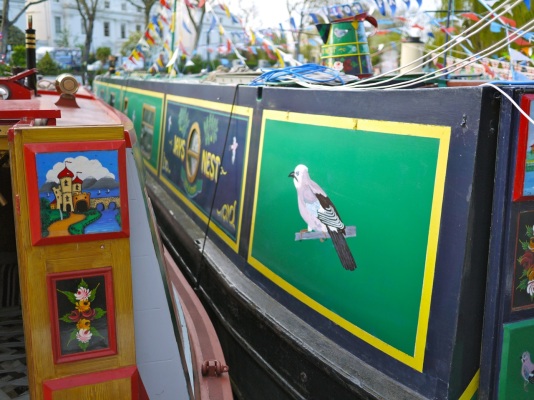 Though they may look similar from a distance, each of the boats has its own character. 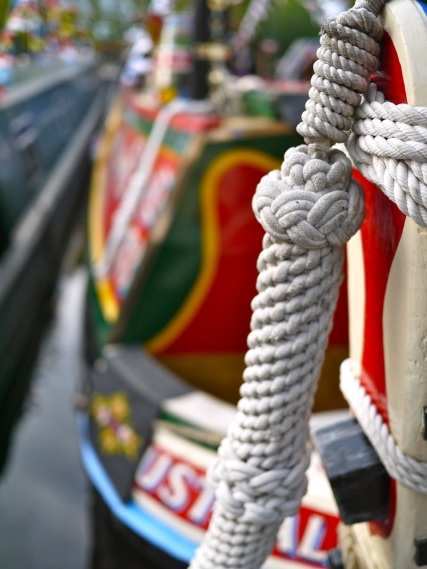 It’s worth stopping for a little wander if you’re passing through next year. 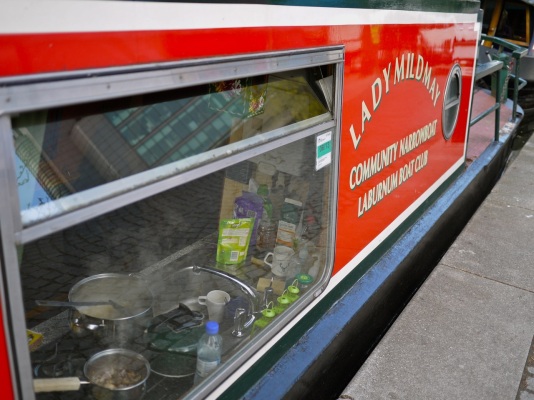 Seeing so many houseboats up close just asking to be photographed was a treat! 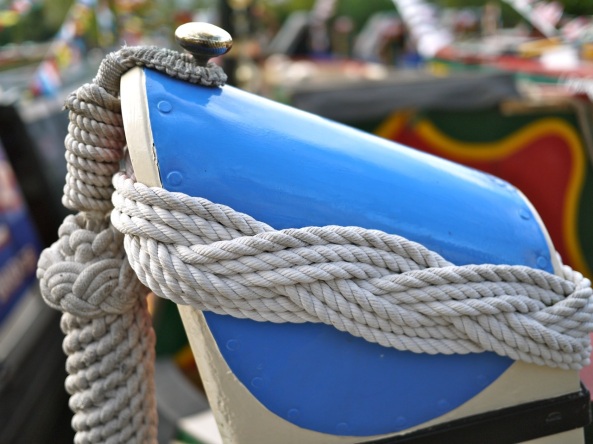 But they’re just as lovely, and maybe even lovelier in their natural conditions without the celebratory atmosphere. They may not be as shiny in day to day life but they seem more authentic. 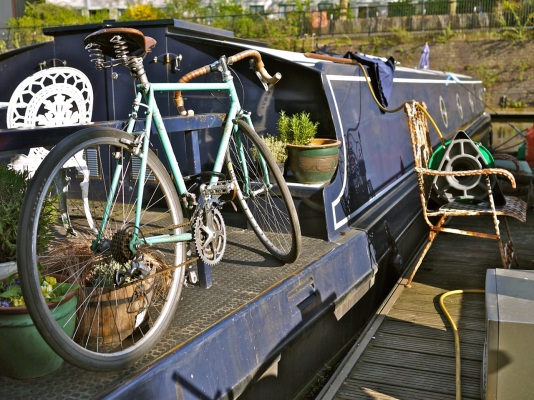 A lot of the boat owners/renters we’ve passed along the canal also seem to have bikes, or maybe it’s just more noticeable as they are attached to the outside! 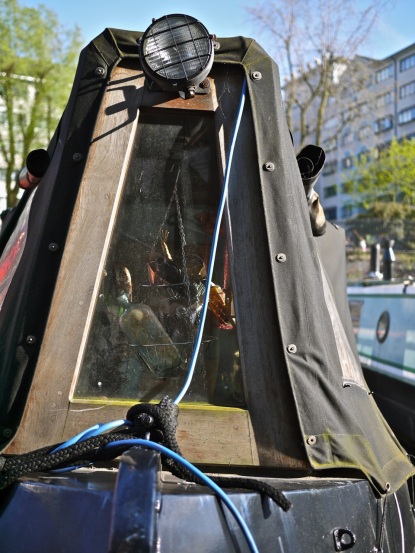 It seems to me quite an eccentric lifestyle, an embrace of minimalism and a sideways step away from the expectations of the rat race society. 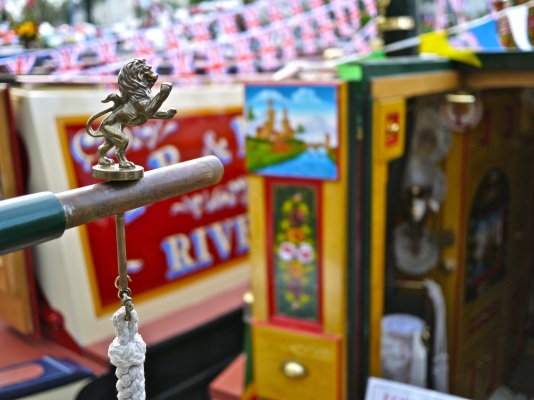 It must be pretty amazing to wake up to swans or ducks swimming past your window or seeing a nest being built from your bed. 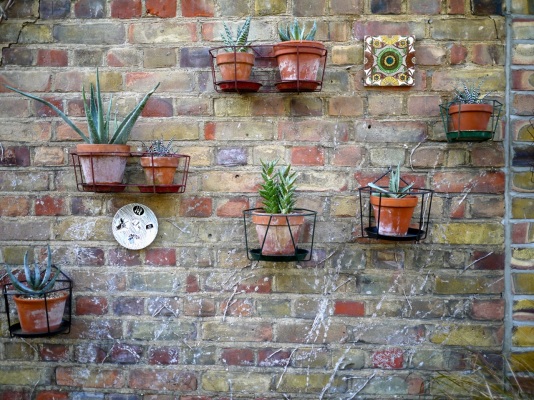 I would imaging the maintenance isn’t much fun though, and with a tight living space you have to be extra tidy and organised. 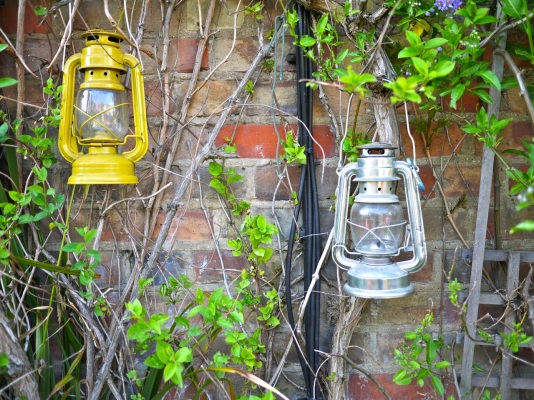 I think the best part about it would be the deck, taking a cup of tea out there in the morning with a good travel magazine and waking up on the water. 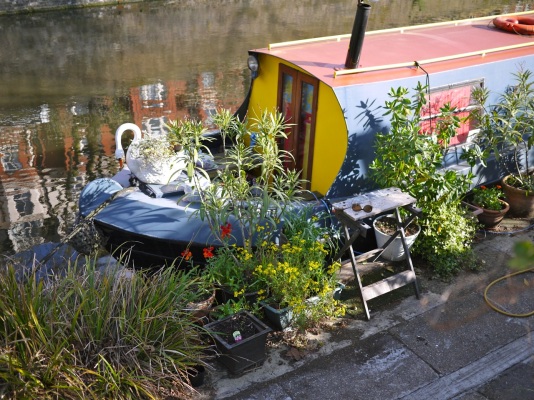 I’m off to Amsterdam tomorrow night for a weekend with the girls so if it’s anything like my last few trips there, I’ll come back with plenty of houseboat photos! 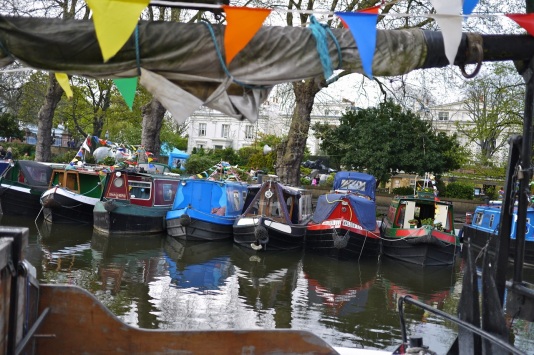 They even have a houseboat museum… 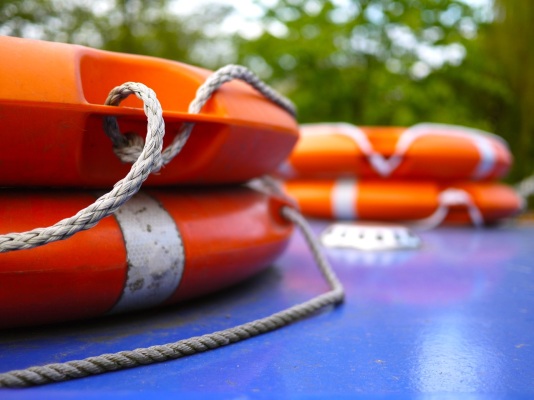