But it’s colourful and it’s one of the oldest markets in London.

Just around the corner, when you enter from the Liverpool Street end is a building covered in work by street artist Ben Eine (who also spray-painted the entire alphabet on a long series of shop shutters on this street in 2010). 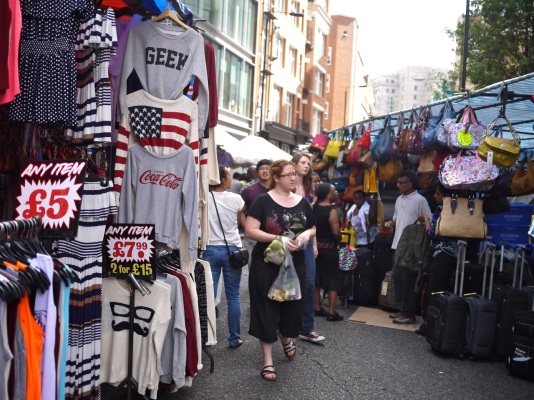 Petticoat Lane as a street has been trading fabrics and fashion since 1608. The main road is actually Middlesex Street now, its name changed by the Victorians who felt it was a bit too risqué, or so the story goes.

Sir Alan Sugar started his business career in a stall in Petticoat Lane Market, boiling and selling beetroot for a bit of extra cash.

It was also prime Jack the Ripper territory as is memorialised in the Jack the Clipper barber shop just on the outskirts of the market area on Toynbee Street. But don’t be scared. It was named one of London’s coolest independent hairdressers by TNT.

The market, and this whole area around Petticoat Lane, Spitalfields and Brick Lane and beyond attracts stunningly diverse crowds. It feels like a true global city. You could be anywhere in the world; it’s as if the whole world has gathered here. 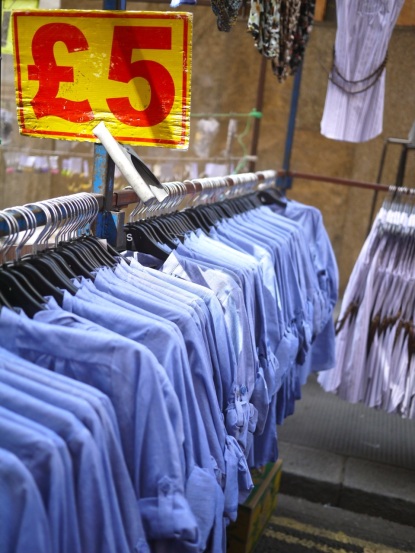 Music pumps through speakers on tables that are selling rows and rows of used CDs, “Who Let the Dogs Out” the featured sounds as I walked by, a few people in the street tapping their feet and bobbing their heads. 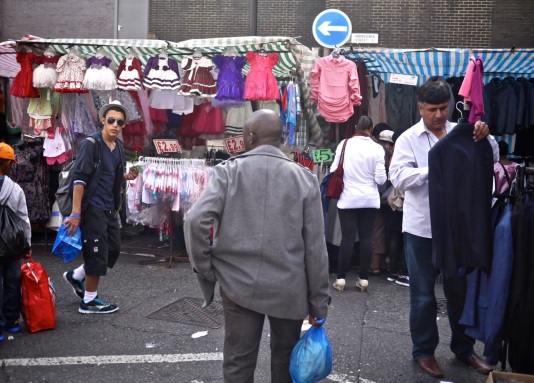 Across the way, there’s a nut seller, which made me think of Christmas. You could smell them from a few stalls down – the smoky, woodsy scent of open fire.

This man selling a variety of lipsticks was one of my favourite shots of the day. 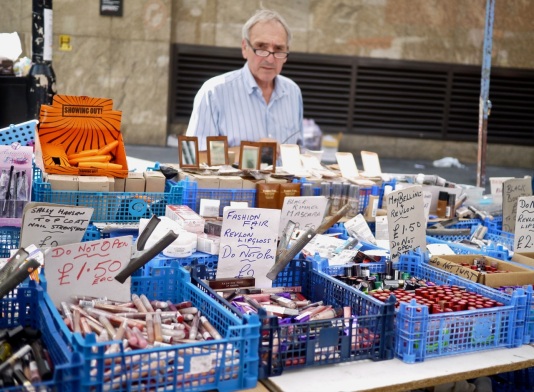 In the distance, the City and the Gherkin loom over brick council houses and the conglomeration of market tables. 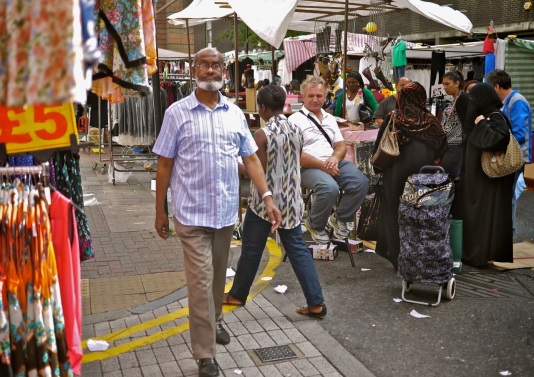 Vendors cry their sales: “Just a fiver. Get your designer goods for just a fiver! Come on ladies!”

It’s a market full of life where people make a living from old fashion trading and locals stop by to bag a bargain without encountering the fluorescent lights of Primark. 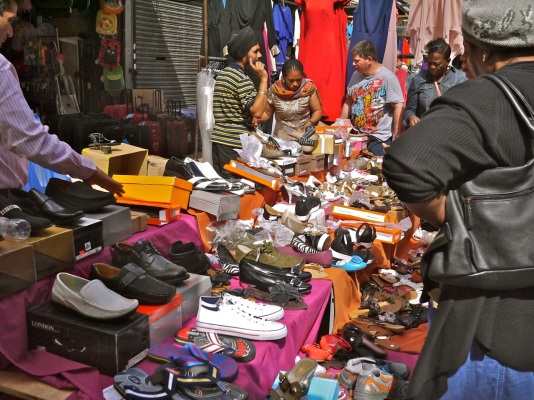 It’s also an interesting area to walk around when the market is not in full swing. The permanent shops along the pavement have names like “African Queen Fabrics” and “Cockney Touch Clothing”.

I’m not sure how long they’ve been around, but dotted along the pavement are painted hats, shoes and other items that are for sale in the market.

It’s not a very big market and I reached the other side before long. But first I took a little detour down Toynbee Street where I found the Jack the Clipper shop.

It’s a pretty run down area, full of rubbish and derelict buildings, weathered posters peeling off of walls.

Some of the posters looked more freshly pasted. 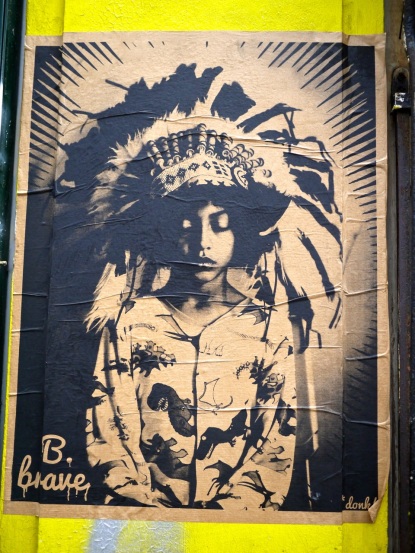 But it also has what may just be a hidden gem covered in graffiti – Mama Thai, which has great reviews on Yelp despite questionable outward appearances! Has anyone ever eaten there?

When I reached the end of Petticoat Lane Market, I walked on toward the just as colourful and diverse Brick Lane, but more photos from there soon!

Hope you’re all having a great Monday! What did you get up to this weekend? Anything interesting? Was anyone else around Brick Lane? I seem to have stocked up the old Instagram account a bit and did some baking on Saturday afternoon when the rain started (If you can handle it, look for a recipe for Red Velvet Brownies with Cream Cheese Frosting on my other blog Little Observationist later today around lunch time…!).