Holi is traditionally a Hindu religious festival celebrated in the Spring season, mainly in India and Nepal.

On top of the coloured gulal powder throwing and dancing that Holi One in London featured, there’s also bonfires, squirt guns and buckets full of dyed water being thrown about.

Not to mention a lot more people involved in this enormous street fest than you’d ever dream of cramming into the car park space next to Battersea Power Station.

I’ve always been fascinated by the photos of Holi that come out of the events in India. They are truly stunning. 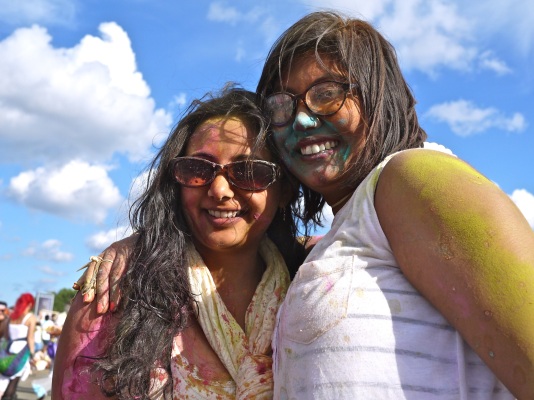 So when Dimple invited me to join her and Kiran at the Holi celebration here in London last Saturday, I didn’t think twice.

Holi One festivities in London (which also travel all over the world) are really nothing to do with this Holi other than that it’s inspired by the colour like The Colour Run. 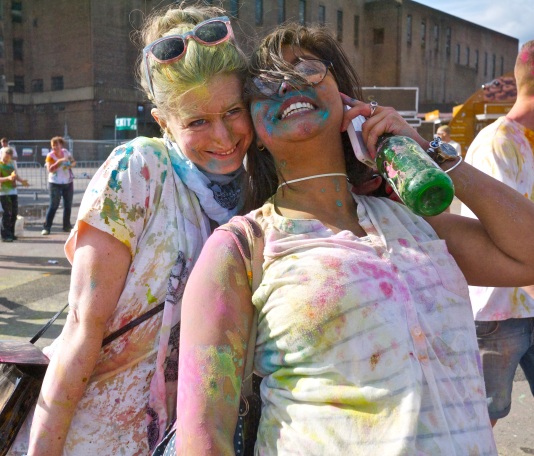 Their website says, “the festival is about promoting the ideas of togetherness and the colour of everyday life during a day of fun and exhilaration.” 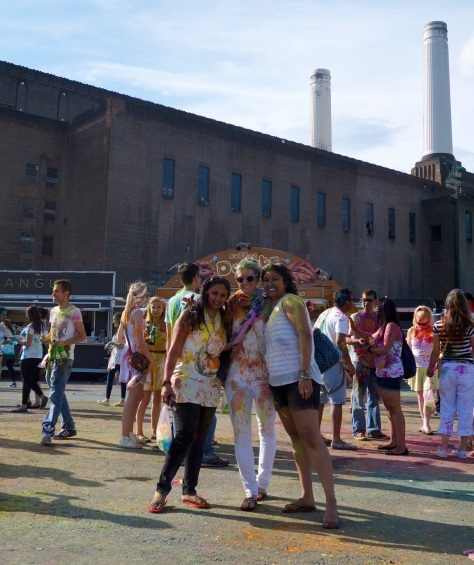 And it was a day of fun and exhilaration.

There were about 10,000 people there, mostly wearing all white. 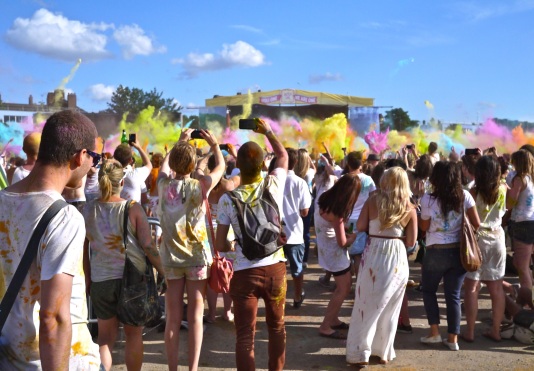 At least in the beginning.

Up front was a stage where DJs played bhangra and other dance music to a crowd packed in crowd.

There were occasional countdowns to big powder throws.

There was a less powdery zone behind the dance area which is where most of these photos were taken because I didn’t dare take my camera out in the middle of the chaos!

The three of us bought 10 bags of powder each – yellow, orange, blue, green and purple. 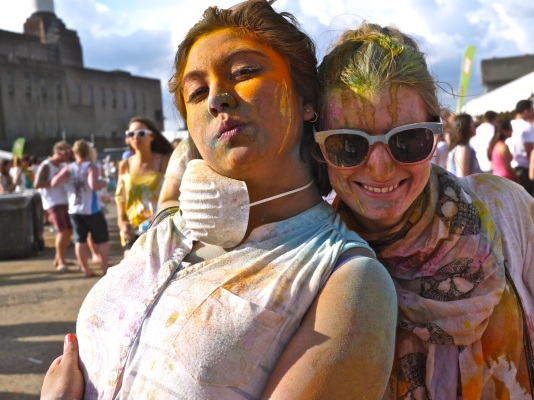 On one end, there was a water area so people were filling empty beer or wine bottles with powder and water or just putting water directly into the bags.

This made a nice sticky paste and much more vibrant colour than the powder alone. 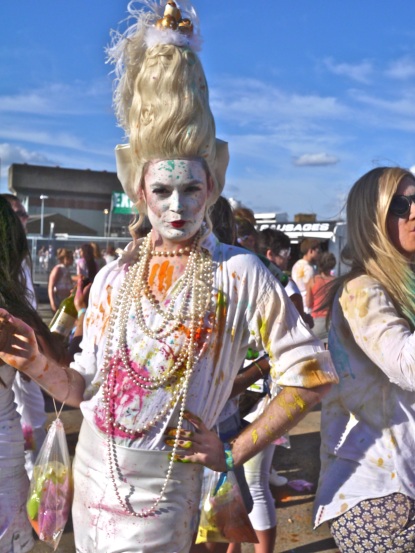 A few people went the extra mile and dressed in costume.

There were feather headdresses, butterfly wings and body stockings.

People sprawled out on the car park concrete in circles, drinking and chatting and the general atmosphere all day was really chill.

As time carried on, our white clothes slowly became tie-dye.

The more colourful, the better.

The powder was all non-toxic, which was great because I definitely swallowed quite a lot of it.

It was pretty unavoidable. 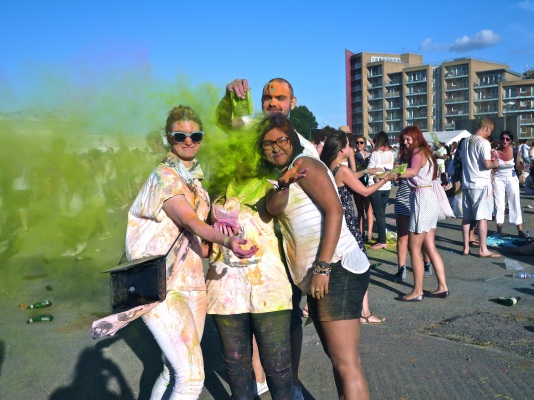 Not that we tried to avoid it. 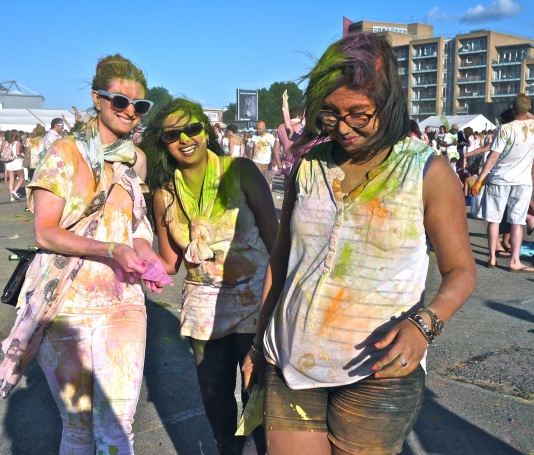 Everything was covered in it.

Once the light started to fade, the water throwing was a bit chilly!

Eventually it was time to call it a night, go home, shower and warm up!

Walking home on my own since the others took train, I got a lot of amusing looks, as I’m sure you can imagine. 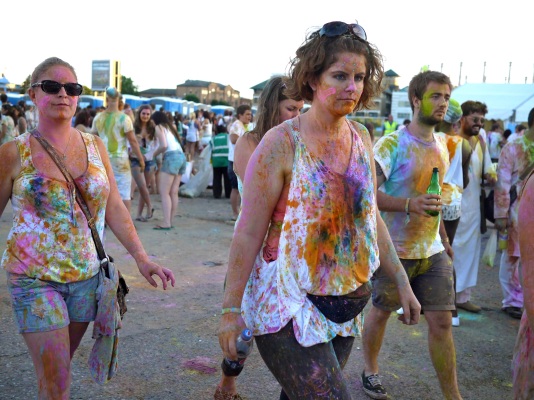 It all came off surprisingly easily, though I didn’t attempt to wash the clothes or shoes – they went straight to the bin.

It was a really fun day, but it was good to be clean again! 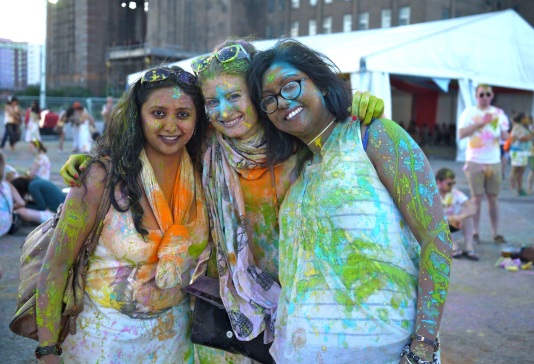 Did anyone else go to Holi One? Or better yet, have you been to the real Holi celebrations?

Paul is a born and bred londoner. Having lived in Central London his whole life, he spent his childhood within a 15 minute walking distance of Buckingham Palace and Big Ben. His favourite thing to do in London or anywhere else is to hang out with his friends on a Saturday afternoon watching the football, or spend it with his lovely fiancee going around all the markets and shops.

LLO: As a born and bred Londoner, how has the city changed since your childhood? Anything you miss?
PM: The city has changed a ton. There is a lot more diversity now, with many different cultures, and its made london more of a melting pot. You really can get anything you like from any culture in the world in london.

LLO:Which part of the city are you most familiar with and what’s the best thing about it?
PM: I’m most familiar with central london as I’ve grown up within walking distance from Buckingham Palace and Big Ben. My favourite part of London is the Southbank and all the bridges that cross the thames – so relaxing and beautiful.

LLO: Best London discovery?
PM: Great family run Italian restaurant near Notting Hill called Ffionas. You have to be there early though because they only have 8 tables.

LLO: If you’re in the mood for some last minute live music, which venues would you check first to see what’s on?
PM: Brixton Academy have shows all the time where you can always pick up tickets on the day, or if you walk through Camden you’re sure to find something you like.

LLO: Tell us about a memorable moment that could only have happened in London.
PM: It has a be a marathon weekend which consisted of 3 live football matches, 3 nights out clubbing and about 3 hours sleep during all 3 days.

LLO: Know of any great little hole-in-the-wall pubs, restaurants or coffee shops that are worth stopping by?
PM: The Black Horse just behind Oxford Street is a great pub, great food, all fresh the same day.

LLO: If you were to leave London in the near future, what 5 things (people not included) would you miss the most about the city?
PM: 1.) Arsenal football club 2.) The London Eye (near where i proposed to my fiancee) 3.) Being able to hear Big Ben on a quiet night from my house 4.) Fish and chip shop on Sutherland Street in Pimlico (best fish and chips on earth) 5.) My mum’s roast dinner

LLO: Best pub to watch your favourite football team on match day?
PM: Either the Barley Mow in Vauxhall or Victoria’s Sports bar above Victoria station

LLO: What about a great venue to go watch some live sport (not necessarily football!)?
PM: Wembley or the Emirates Stadium, or Battersea Power Station where they have live festivals, extreme sports/extreme Winter sports.

LLO: Share a random London fact that not many people would know.
PM: The actual City of London is only 1 square mile. All other major roads such as Oxford Street, Piccadilly and Regent Street actually come under “The City of Westminster”.

Even though being the sovereign of The UNITED KINGDOM, Her Majesty the Queen is not allowed to enter the City of London with seeking the permission of its Lord Mayor.