W’s parents are in London for a month. Yes, they brought him a big box of “hormigas” straight from the source in Colombia. These ones were caught and toasted by his mother, rather than the ones I found packed and sealed in Selfridges. Seeing as the hormigas post was so popular a few months ago, I thought I’d share a few other bits of Colombian culture that they brought my way. It doesn’t involve giant toasted ants, but prettier and sweeter things instead.

This lovely bag and change purse were handmade by his sister. She should sell them, really, but she just makes them for friends.

These sweets come from Mogotes, soft and powdered sugar-coated. They’re strawberry (fresa) and they brought me a second box that is the flavour of apio, which, according to my Spanish dictionary, translates as celery!

This is Arequipe, also called dolce de leche by non-Colombian Latinos. It’s rich and delicious, a dessert and a spread. The bottom layer is soft and gooey and tastes like caramel and it’s covered by a guava-flavoured layer that looks and tastes a bit like a big circular Jello Jiggler. It’s sold by street vendors in Colombia along with a flat wafer called obleas. The night W’s mother gave it to me, I tried it on a piece of fruit which is another popular way to eat it. It can also be drizzled over ice cream if you heat it up. Very sweet!

W’s other Colombian friend’s brother is also in town, coincidently. Though he doesn’t speak any English either, he was lovely when I met him and gave me a few tastes of his home country as well. 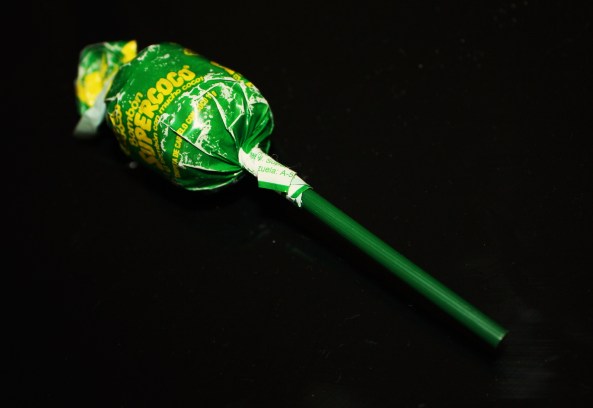 This is a Supercoco lolipop, “El bombon con mucho coco!” He also gave me a Colombina Coffee Delight sweet, seeing as Colombia is so famous for its coffee. 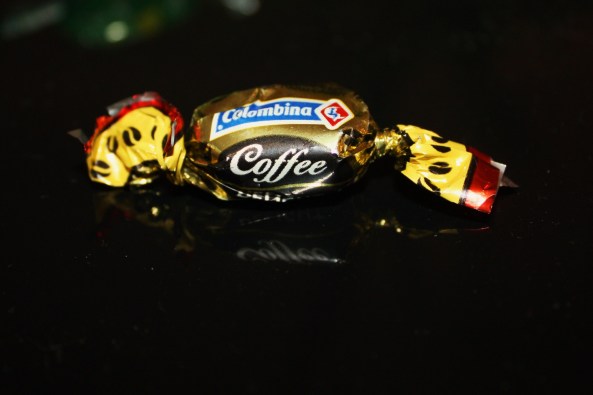 And speaking of coffee, I think it’s about that time. Adios!