The fire is blazing next to me and shoppers are heading past the windows of The Chance Gallery to get a head start on their Christmas shopping. It’s the last day of my photography exhibition, with about four hours to go so I thought I’d share the 18 prints that are on display so that those of you who weren’t able to make it down can see them. It was wonderful to be able to meet some of you at Monday’s opening event and more of you who popped in to say hello during the week.

I was surprised at the launch party by my dad who showed up unannounced and unexpected all the way from New York. It was an amazing night with about 100 people flowing in and out of the gallery, enjoying canapés, wine, fireplaces, photography and good company. Here’s a couple of photos before I dive into the exhibition prints: 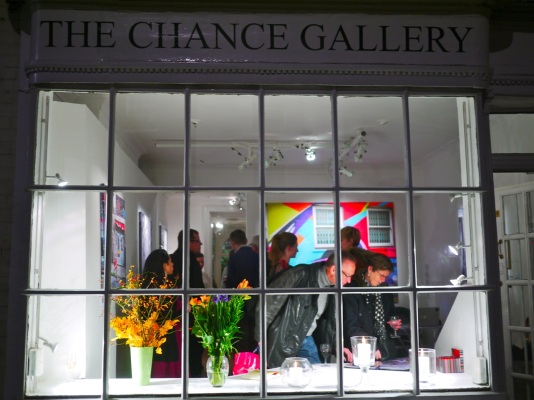 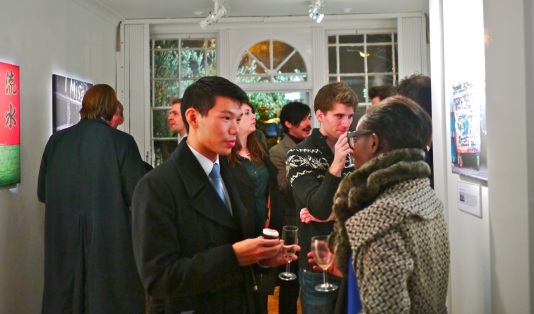 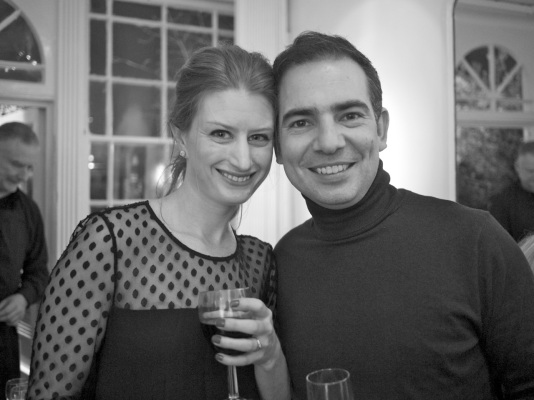 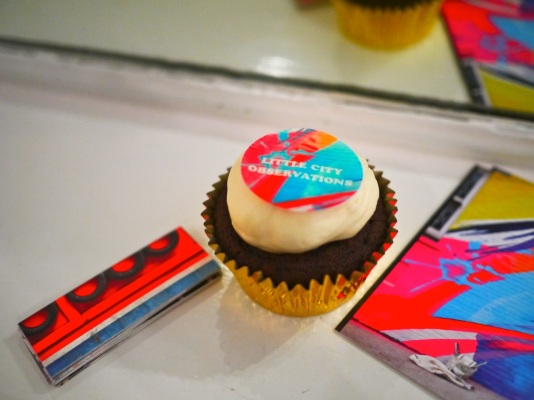 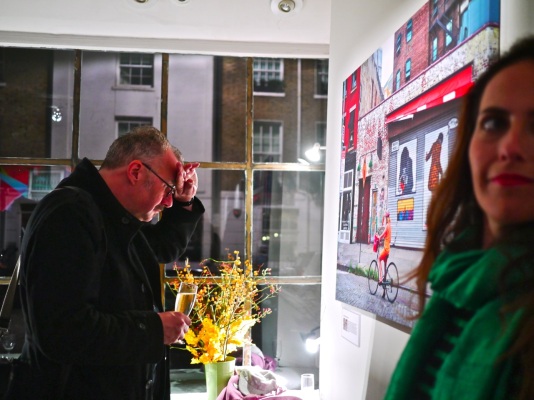 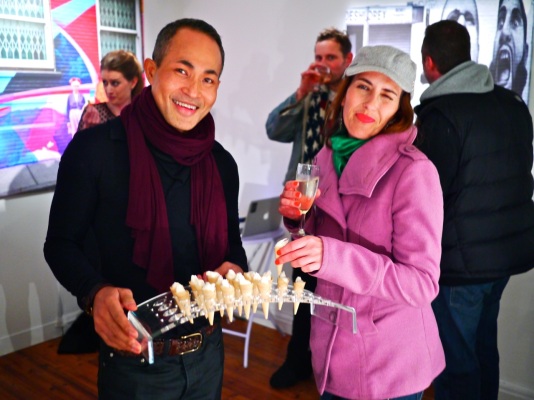 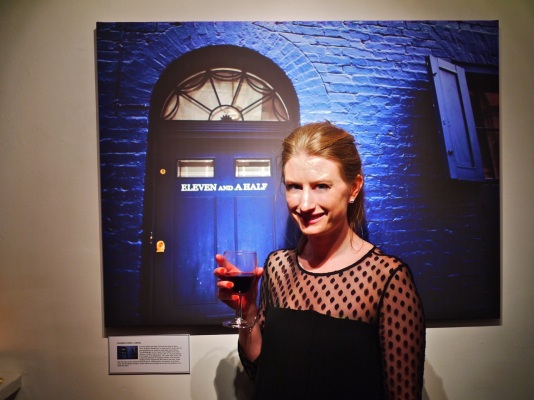 And these are the photos from the exhibition –

CHANCE STREET, LONDON. With bright, colourful walls and a focus on fashion, Shoreditch draws a creative crowd. It’s not unusual to see budding models, photographers, designers and bloggers collaborating to share and spread their talents. This photo shoot was taking place against a new mural by Claudia Walde, better known as MadC, from Germany. She’s worked in many countries and is one of the most well known female street artists around today.

HANBURY STREET, LONDON. Paul “DON” Smith is one of London’s most prolific street artists. He has been painting on walls since the mid-1980s. DON also worked in the film industry for 12 years, which has a heavy influence on his work, as does his passion for music. He uses stencils to create layers and often flicks extra paint onto his finished piece to add energy. This one is on the side of a concrete building on Hanbury Street, across from a shop selling vintage shoes and handbags.

HANBURY STREET, LONDON. The area around London’s Brick Lane is a street art hub and includes some legal walls like this one. The photograph shows the way art interacts with the local environment. Ben Slow’s artwork has since been painted over, but it features a white nationalist from the English Defence League (EDL) and an Islamic Extremist. Ben expected a bit of a backlash but he was surprised how well people have embraced it and understood its meaning. These two figures are worlds apart in their own minds but both represent intolerance, hatred and racism.

SPITALFIELDS MARKET, LONDON. The random message “I miss you + your character” was scrawled across the brick wall at the edge of East London’s Spitalfields Market one Sunday afternoon. It was written in chalk and didn’t seem to catch the attention of many people passing through the gates. Not long after this photograph was taken, the words were washed away with no indication of who was missed or what it was about their character that was so memorable.

WEST VILLAGE, NEW YORK CITY. It was the week of the July 2013 heat wave in New York City when temperatures rose to around 38 C. This photograph was taken in the West Village not far from the High Line. It pulls different elements together into one image that gives a sense of the area’s vibe with street art in the background on a building with peeling paint, trendy shops on the side and a young woman on a bike with her purchases.

CAMBRIDGE HEATH ROAD, LONDON. Stik’s work is highly recognisable, the figures found on many buildings in London and other locations around the world. He was homeless not so many years ago, and now people such as Bono, The Duke of Kent and Antony Gormley own his original art, making his a story of success. Painted with just five lines, two dots and a circle, each figure is meant to represent some human emotion and as this photograph shows, the paintings often interact and play with their immediate environment.

PORT OLIMPIC, BARCELONA. In the creative city of Barcelona, architecture is a major draw. This is a modern example, a ball that appears to teeter on the edge of a building near the Port Olímpic marina where sailing events were hosted during the 1992 Summer Olympics. The photograph itself is black and white to give focus to the lines and forms. It’s about finding balance.

DOWNTOWN DUBAI. Standing near the Burj Khalifa Lake, the tallest building in the world stretching up to the sky in front of him, this man was watching crowds milling around the Dubai Mall (the largest in the world) with a friend. He pointed to the camera, pointed to his artificial eye and posed for a photograph.

HANWAY PLACE, LONDON. London’s Soho neighbourhood is famous for its sex, drugs and rock and roll history. Now, its streets are lined with hipster-filled coffee shops, market booths selling vintage clothing, designer boutiques and tourists wandering in from nearby Piccadilly Circus and Leicester Square. This is Hanway Place which weaves its way between buildings near Oxford Street. The popular modern Michelin-starred Hakkasan restaurant is on this small street as is the impressive building that used to house the Westminster Jews’ Free School built in 1811.

CHINATOWN, LONDON. London’s Chinatown is full of colour and teeming with life, from local Londoners to Chinese immigrants to curious tourists passing through. There are bakeries selling Chinese goods, restaurants with ducks hanging in the windows and plenty of tacky souvenir shops. This photograph was taken during the city’s Chinese New Year celebrations – the largest outside of Asia. It combines small elements that give a sense of the surrounding area – the bright green bricks, the red sign with Chinese characters and some produce for sale.

SOUTH BANK, LONDON. This photograph shows the detail in one of the lampposts lining the Queen’s Walk on South Bank, looking out toward Westminster Bridge and Big Ben. These are commonly referred to as “dolphin lampposts” but are said to actually represent a type of bottom feeding fish called a sturgeon. They were designed by George John Vulliamy in the 1800s and were originally only on the other side of the river. The one in the photograph is from a series of replicas that were brought to the south side of the Thames in the 1970s.

GRACIA, BARCELONA. Barcelona mornings mean waking up with coffee and a newspaper, watching life unfold in the narrow alleyways below the flat, listening to dogs barking occasionally, workers rolling carts over the pavement and neighbours chatting. This heart was built into the iron railings of a 3rd floor balcony where the day began. The photograph was taken early on a Spring morning that turned into a warm and sunny afternoon.

FOURNIER STREET, LONDON. Fournier Street connects Commercial Street to Brick Lane, ending at BanglaCity, a supermarket, which sells all the ingredients one needs to cook tasty Asian dishes. This photograph is of a house in the middle of Fournier Street at number “eleven and a half”, an unusual address that houses an art dealership. The street itself, which has a stunning collection of Georgian homes, once housed wealthy French Huguenots who lived in the area. It was later the heart of the Jewish East End and is, most recently, the location of the Brick Lane Jamme Masjid mosque. Artists Gilbert and George have lived and worked on the street for years.

BRICK LANE, LONDON. In a city where making eye contact with strangers is uncommon, a smile exchanged between two random people is even less so. This message was written on a bright pink wall on Brick Lane, a reminder that acknowledging a stranger in a massive city like London may not always be such a bad thing after all. It may even turn out to be therapeutic.

LEAKE STREET, LONDON. In 2008, the tunnel that runs down Leake Street, under the tracks and platforms of Waterloo Station, became known as the “Graffiti Tunnel”. It started with the Cans Festival, organised by Banksy, during which talented artists filled the walls of the tunnel with art. Over the years, the space has remained open to graffiti with an “Authorised Graffiti Area” sign at the entrance, though the quality of the work on display has diminished, as is evident from these rubbish containers nearby.

NOTRE DAME, PARIS. There is an eerie stillness inside of Notre Dame. “It was a great cave in the midst of a city,” Henry David Thoreau wrote. “And what were the altars and the tinsel but the sparkling stalactites, into which you entered in a moment, and where the still atmosphere and the sombre light disposed to serious and profitable thought?” The open gates in this photograph show silence, darkness and light and the seriousness of the atmosphere inside the cavernous cathedral.

CAMDEN STREET, DUBLIN. Dublin is a rainy place indeed, so this piece of urban art by Anna Doran is appropriately placed. It’s often seen interacting with the umbrella-carrying locals who pass down this creative street, walking over glistening pavements, past colourful shop fronts. There’s an organisation in Dublin called Evolve, which helps street artists like Anna find legal places to create commissioned pieces of work like this one to brighten up the city.

CITY QUAY, DUBLIN. The angle of this photograph brings to life the struggle represented by The Linesman, a bronze sculpture by Irish artist Dony MacManus. It sits on City Quayside near the point where Dublin’s River Liffey meets the sea. As the linesman is doing here, workers pulling ropes once tied up ships at the quayside. This image offers another perspective beyond the immediate view upon passing by.