Spotted by SReed99342, this is too good not to share. And another one that probably needs no words. I’ll leave the captions to you.

His target? Up close…

All happening in Parliament Square…

A rainbow-striped peace flag flaps in the sudden warm breeze as Big Ben sounds twice, early afternoon. Sprawled across the green patch of Parliament Square are canvas tents, bent cardboard signs and placards, a few stray sandals and water jugs and a refreshing atmosphere of activism.

There’s a battered old guitar stripped of paint laying on the ground, a bare-footed girl sitting cross-legged in the sun and a middle-aged man in a baseball cap patting a new plant into the circular peace garden they’ve created in the centre.

They call it the Democracy Village, this group that has set up camp around Brian Haw’s famous protest.  (However, Brian’s website states in bright red letters that his ongoing protest has “no connection or affiliation whatsoever with ‘Democracy Village’ which came here on May 1st 2010.”)

Brian, Parliament Square’s world-famous protester, has been camping out in the square for3,294 days now. That’s just over nine years that he’s been living under a tent, eating whatever food his supporters offer, washing in a bucket and sitting in the sun or snow smoking enough cigarettes to give him a nasty cough. Apparently an anonymous washroom attendant in Westminster tube station’s public toilets charges his phone so he can keep in touch with the world outside the square.

I walked up to Brian who was sitting in a fold-up chair, the crutches he uses to walk leaning against the sides. He was staring out at the Houses of Parliament with striking blue eyes, his signature badge-covered helmet casting a shadow over his face. He glanced at me and I asked if I could take his photo. With a solemn silent nod he acknowledged my request. When I thanked him, he did the same again.

Living his life as an outdoor exhibition has taken its toll. You can see it in his weathered skin, the tiredness of his body, the slow and contemplative way he turned a lighter around in his hands. There was a distinct weariness about him alongside the sort of strong mental determination of the sort of person who can stand for his beliefs so powerful that his wife and seven children fall out of the picture, who can step up against one of the most powerful governments in the world, to be considered a permanent representation of freedom of speech for an entire nation.

His protest began the summer before 9/11 when he was campaigning against economic sanctions imposed on Iraq and the bombing by the UK and US. That September, his focus widened to include the War on Terror.

Now, “He protests on behalf of those innocent people who suffer and die in other countries, as our governments seek to further their own economic, military, political and strategic interests around the world.” In 2005, he was short listed for a Human Rights Award and in 2007 was Channel 4’s Most Inspiring Political Figure.

There have been many attempts to evict Brian from the square, many court cases and arrests, including the most recent last month. But he’s still there and, despite revived attempts to remove him, it doesn’t look like he’s got any other plans.

While this lifestyle has left 61-year-old Brian drained of physical energy, the camp that has built up around him was lively, engaging the crowds with anti-war chants and sing-a-longs.

As I walked away, Bob Dylan’s lyrics floated across Bridge Street, “How many deaths will it take till he knows that too many people have died?”

Here’s a great Indy article on Brian if you want to read more.

Through a friend of a friend, I was lucky enough to be able to bring in the new year in Parliament Square. We went to a fancy dress pop star party at her house just around the corner from Westminster Abbey, were taken through a blocked off area to a nearly empty Parliament Square about 11:45 – just in time to see the fireworks but not have to put up with the crowds or the cold…. 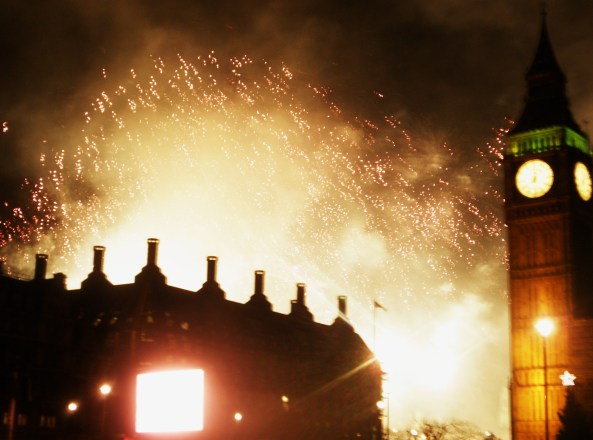