Martin Payne, born in Barking but left with a family move at age 2, returned to work in London following a work re-location. He describes himself on Twitter (@MWPayne) as “Accountant on weekdays, Murderer at weekends, a Plinthian, and an occasional Gorilla … oh and I steward at the Globe / usher at Tristan Bates Theatres…”.

LLO: London is one of those places that thrives on random, unexpected moments. You’ve contributed to the randomness by recently wearing a gorilla costume for a charity’s silent disco and the gorilla run. What’s the most unusual thing you’ve done in London that may have made a few people look twice?
MP: The gorilla suit is worn to raise awareness of the Gorilla Organization (formerly the Dian Fossey Memorial Trust). It’s a charity I have only relatively recently started supporting – due to the sheer Great British Eccentricity of donning a full gorilla suit and running 7km to raise funds to help both gorilla protection and people support in Rwanda, Uganda and the Congo. The Gorilla Organization provides efficient fuel stoves and work for families living near the three Gorilla areas to try to minimise the need for poaching and thus protect the Gorillas. As well as the Silent Disco (Millennium Bridge) and the Run itself, I’ve also been videoed wandering around dressed in a business suit and gorilla head to raise awareness of the Run and the Organization – great fun to do and a real shock for people suddenly realising the guy in the crowd next to them is a Gorilla! 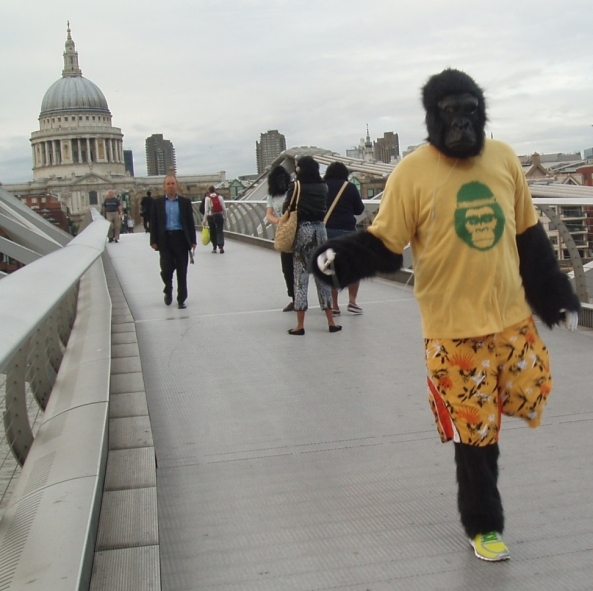 On Saturday 13 November 2010 (today!) I will exchange my Gorilla Suit for a fox suit as I’ll be the mascot for the Balfour Beatty London Youth Games float in the Lord Mayor’s Parade! I hope that will make more than a few people look twice – especially as the float is at almost at the head of the parade! I’ll just be trying to avoid any “messages” left by the horse of the City of London Police’s Assistant Commissioner which is immediately ahead of us, preceded by the Band of the Grenadier Guards. Being “Foxy”, the mascot of the Games, will certainly be a very different way of spending a Saturday in November! 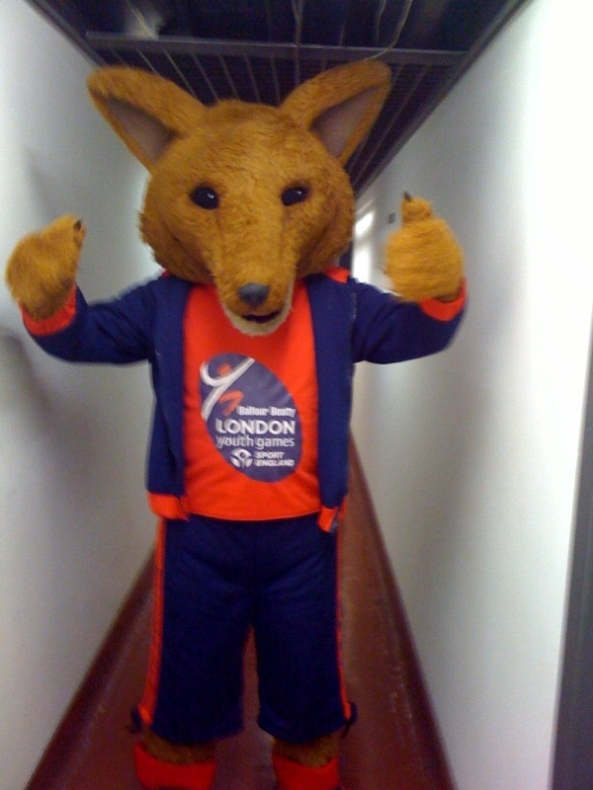 LLO:Tell us about a favourite London moment that could only have happened in London.
MP: Only in London could a ‘normal’ person (if I am one) be able to stand on a Plinth in Trafalgar Square wearing a Gorilla Suit for an hour. A once in a lifetime opportunity and one that I will remember forever. Of course, it has to be in London since Trafalgar Square is here but … 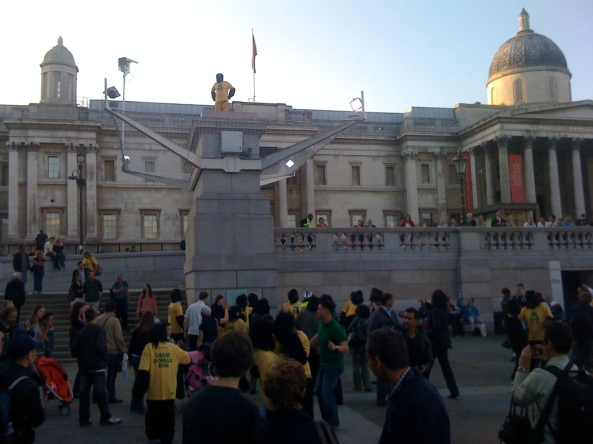 That was the 2009 “One & Other” project by Antony Gormley as part of the London Mayor’s Fourth Plinth commission. Has any other city tried something similar? Only London could be the first.

LLO: Have you ever overheard anything really amusing on public transport that you’re willing to share?
MP: My exposure to public transport tends to be limited to the train into either Vauxhall or Victoria (depending on whether I wake up in time to change at Clapham or think the weather is nice enough to walk to work from Vauxhall – or ‘Boris Bike’ it). So I really can’t recall anything amusing – but there must be a law that says I will now hear something really amusing too late for this interview!

LLO: I want to go on a date in London – somewhere quirky or unusual. What would you suggest?
MP: Trudy, my ‘other half’, and I have decided that we need to spend a weekend in London being tourists and certainly one of the places on the list of places to visit (‘have a date’) is the Wellcome Collection. I was there in October 2010 for the launch of the “One & Other” book celebrating Antony Gormley’s “One & Other” on the Fourth Plinth in Trafalgar Square and so I picked up a few leaflets. That may be somewhere different…

LLO: Is there a place in London that always seems to make you happy? Why?
MP: I guess that my time spent stewarding at the Globe Theatre on Bankside would fit this question. The Globe seems to have exactly the right atmosphere for making Shakespeare work and be understandable – and it’s great for people watching! There is a degree of responsibility as a steward in looking after the safety of the audience members and trying to stop sections of the audience from irritating other sections with mobile phones etc, and it is a long evening standing, but it’s a great way of seeing a lot of performances at no cost!

LLO: What’s the best thing about living in your postcode?
MP: I don’t actually live in London, but in Windsor in Berkshire. The best thing is probably being close enough to London to be able to work here (an hour’s commute) and yet be almost instantly into green space walking out my front door. Mind you, the worst thing is easily the tourists … but my ‘other half’ and I have got into the habit of waving at the coach parties as they trundle past our front window as they invariably are looking directly into our house – most look away quite quickly when they realise we’re watching them as much as they are looking at us!

LLO: You’ve got a free day to explore a part of the city you’ve never been to. Where do you go and why?
MP: There is a place that I have wandered through once and I do want to go back and explore further – The Inns of Court. It seems to me to be a very tranquil place, away from the hustle and bustle of the City surrounding it. I’m waiting for the London Observationist to take some pictures…

LLO: I’ve got one night in London and want to head off the beaten track to find something to eat and drink. Where would you recommend?
MP: Just off the beaten track is a café called “Stockpot” (Panton Street, just off Leicester Square). Friends of mine took me and Trudy there for a meal after my stint on the Fourth Plinth. For that reason, it is memorable – and the food was excellent and good value despite being so close the Leicester Square / Trafalgar Square.

LLO: Best London discovery?
MP: I’m not sure it is really a discovery of my own, since it was suggested to me as something that Globe stewards could do during the Globe’s ‘close’ season (winter performances in an open air environment would not be generally well attended!). I spend some evenings ushering at Tristan Bates Theatre, just off Seven Dials. This is a very small theatre, attached to the Actors Centre, that has a maximum seating capacity of 70, and is usually not full despite the very cheap tickets (for a West End theatre, the average ticket price is £10 – £12). There’s never any major shows playing there but there are frequent changes of shows (perhaps a bit developmental and not necessarily as long an evening which means that you are in the West End and still have time to enjoy the after-show buzz – but, for me, early finishes there mean I don’t miss my last train home!

LLO: Who is the most interesting Londoner you’ve met and why?
MP: Difficult question because some of the most interesting people you meet simply have an impact on you but you may never know their name or meet them more than once. There was a great guy I met in a pub once near Westminster Bridge – he either was, or at least pretended to be, a town crier and knew many of the Pearly Kings and Queens. I think he passed away a few years ago.

More recently, I re-met “Captain John”, a fellow Fourth Plinthian and a staunch supporter of the Fourth Plinth project in general and ‘One & Other’ in particular as well as being one of the very few people who attended every day of the Diana Inquest….