A few months ago, I was asked to write a small piece about Notting Hill to be published in a book about London’s neighbourhoods. The book arrived last week.

Snippets of a Morning in Notting Hill

8am
Early Saturday morning, it is raining – a slow London drizzle, like mist. It hangs in the air over Portobello Road where watch as the market begins to unfold. Behind me, where I bought the tea that is warming my hands, a bedraggled man with holes in his jeans and dirty fingernails is tapping them against the counter. He says he will pay tomorrow. He’s tapping his foot now. Please, just a coffee, Miss. Please, just this once. Across the street, a vendor wheels a stack of cardboard boxes bursting with tomatoes and carrots, red and orange, an unlit cigarette dangling from one corner of his lips. He parks his boxes and fishes for a lighter in his shirt pocket. Seconds later, one flies through the air and he says, “Cheers mate” and cups one hand around his light to block out the wind.

9am
I wander along, musing at the scent of last night’s kebabs and empty beer cans left on windowsills. “I can predict your future” is scrawled across a rubbish bin in silver paint, an amusing attempt at 3am creativity. Around me, umbrellas move slowly through the closed-off streets. A baby cries, a mother hushes, a bird lands on a street lamp and cocks its head. Women are chatting, arranging earrings on tables, hanging vintage dresses on makeshift stands, positioning mirrors, boots, books and CDs, smiling at early customers. They put final touches on their make up. Red busses squeak to a stop on Ladbroke Grove and the market begins to feel alive.

10am
Brollys are all folded now, swinging along, leaving trails of drip, drip, dripping rain on the pavement and the sun creeps out from behind grey clouds. I pull another strawberry out of a generic blue plastic bag and let the sweetness fill my mouth. “Hey Fred, look at this!” an American woman says. Fred grunts at a plate in her hands and eyes up a long-legged girl in tight jeans when his wife turns her head. This is the antique end of the market, old cameras stacked on wooden tables, teapots and silver spoons, white buckets for “Norfolk Lavender” and “Chilled Wine” hanging in the doorway of Alice’s. I linger to watch a band play in a semi-circle of people who toss loose change into a guitar case after a few seconds and walk on.

11am
A man is standing silently, completely still, in the middle of the road, crowds splitting around him as if his stillness is contagious. He’s wearing a placard with graphic pictures of animal abuse. It says, “Who cares?” One woman turns back and smiles. She says, “I care.” 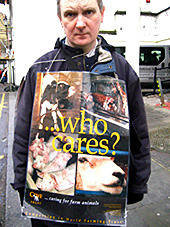 12am
Slick with city rain, headlights reflect in mirror streets again. I slip into the Comic and Book Exchange near Notting Hill Gate, a rare second-hand bookshop that has a basement with a cyclone of titles and a satisfying musty smell, great tunes and well-read staff. A brilliant place to wait for the sun.

One of my articles was just published in Seven on homelessness and some of the people who break through the stereotypes.

Big Issue seller Ralph Millward was beaten to death by three teenagers last month, but an overwhelmingly compassionate reaction from the local Bournemouth community exemplifies the wide spectrum of attitudes toward the homeless. At Ralph’s funeral, a friend said: “We’re all the same. Understand us; we’re just people.”

One of my articles was just published in Seven on a theatre production called Graceless which addresses Feminism and its meaning in 2009:

Womanhood means independence, love, nurture, office politics, impending wrinkles, wobbly bits to conceal and curves to flaunt. It makes us vulnerable to the lure of frilly knickers and inevitable blisters from staggeringly high heels that would make Carrie proud. Womanhood leads us on a journey of friendship, family and self-discovery, twisting around the oddities and awkwardness that often accompany us on the ride. It’s about time we confronted the raw truth of it all. Continue reading…