I’m not usually big on statues, but I love these hare sculptures at the end of The Mall near the Admiralty Arch. They’re in a nice little square with usually-empty benches and nice leafy trees. It’s a good place to chill out with a book and a coffee and still enough life to people watch without the crowds of Trafalgar Square.

Favourite public art in London, anyone? 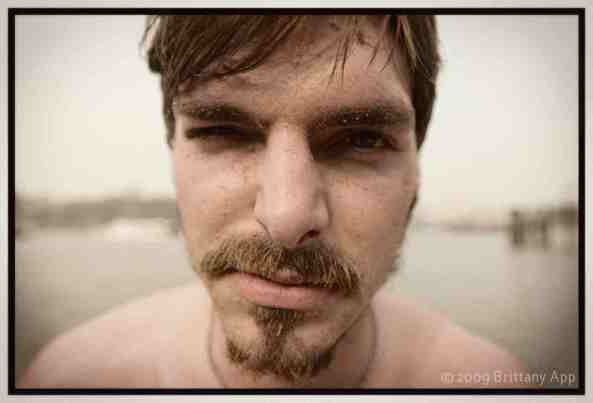 This is Andrew Robertson, best known as “Sandy Andy”, a man who has taken the little strip of sandy beach across from Gabriel’s Wharf on the Thames and transformed it, with the help of his crew, into The Dirty Beach. Take a walk along the river and you’ll likely see a string of curious people leaning over the railing, tossing coins onto a sheet. With amazing attention to detail, Andy and his crew have constructed hands, people, monsters, rats in a sewer, dinosaurs, skulls and, most famously, the giant couches where they chill out with a beer until the tide rises up around them.

But it’s not just about playing in the sand. They also throw some brilliant BBQs with bonfires and set up sand stages for music and comedy. All the while, they’re tidying up the beach. The world is a better place when it’s clean and creative.

For this week’s London Art Spot, Sandy Andy tells us about the fascinating and nasty things he’s found washed up on the sand, shares plenty of cool photos and maps out his life from creative entrepreneur to homeless to game show contestant and TV extra to stripper to, well, creative entrepreneur – only, on the beach. 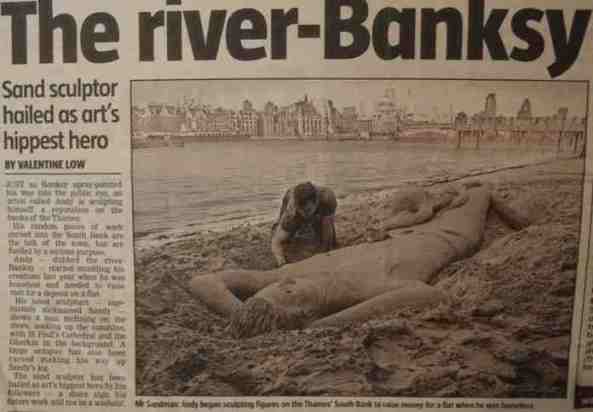 LLO: Are you from London? If not, where are you from, how did you end up here and how long have you been here?
SA: I am from the Midlands. After I left college, I trained and worked as an inspection engineer. I was settled with a house and a dog but it wasn’t what I wanted from life. I tried to set up my own company making handmade birthday cards, but that failed in the first year, so I tried selling magic tricks and opened a magic shop in Warwick. I came down to London six years ago to try to work in TV when my magic shop went bust and I had to sell my home to pay off the debt. 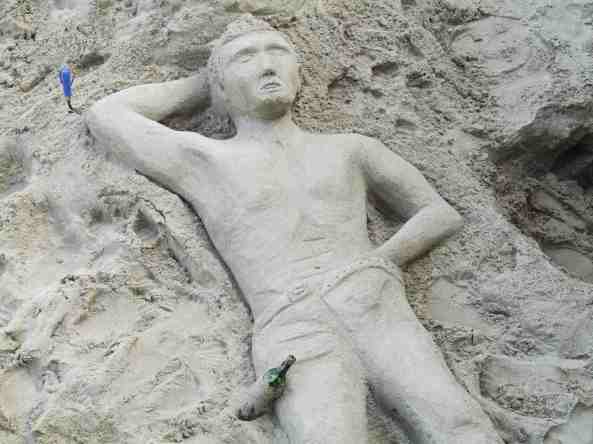 I worked as a TV extra and did a bit of modelling, but made most of my money as a professional game show contestant. For about a year I applied for every stupid game show I could and ended up winning over £26,000. But after a while I found it hard to get on any more shows as a contestant because my face kept popping up all over the place. I soon blew all the winnings on drink, girls and motorbikes. And because of my refusal to work in a proper job, my only income came from working as a stripper at weekends in Stringfellows. I ended up living homeless on the streets of London. 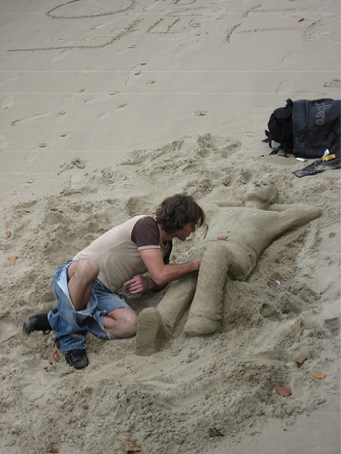 (Andy when he was homeless)

LLO: What made you first wander down to the little strip of sand on the Thames and decide to build a couch and how long ago did you start?
SA: About four years ago – while I was homeless for the summer and used to potter around all over London. The beach was one of my usual haunts, but I would also spend a lot of time in the parks. Anywhere I could sit around for free, drinking in the sunshine, that would become my home. I’d make money doing a few magic tricks, busking in the streets but with no living expenses, life in the city was fairly cheap. One day down on the sand I decided to build a person. Some chap threw down a pound and took a picture – it was quite obvious I was broke and homeless and I think he felt sorry for me. I had no intention of doing it for money, but I spread out my jacket, placed the coin on it and carried on. It turned out to be the best busking I had ever done.What made it great was the fact that once I stopped to enjoy a sit down and roll a fag people were still throwing me coins.

The sofa evolved over time as people enjoyed seeing me sitting down and doing nothing. Which is something I can do quite well. 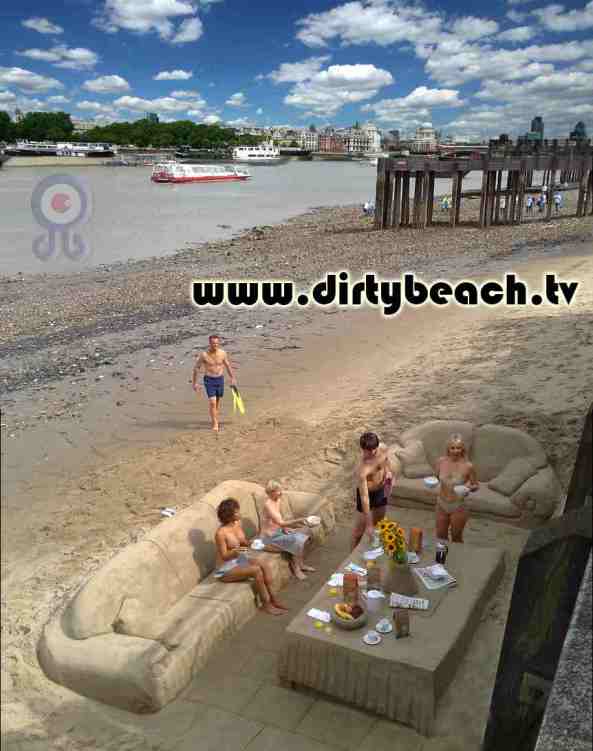 LLO: What’s a typical Dirty Beach day by the Thames like?
SA: It’s hard to say as no two days are ever the same. It could be a beach party with live music and lots of people drinking around an open fire or a quiet day of artistic expression with lots of quiet time for personal reflection. The difference the weather makes to my day is huge and the tides are never the same. I could be down there at 5am to start work as the tide is going out or I sometimes don’t start work until 5pm at which time London has a very different feel.

It always involves picking up a bit of litter and doing some digging to make a sculpture. Whatever happens, my beach office always has the best views of London. 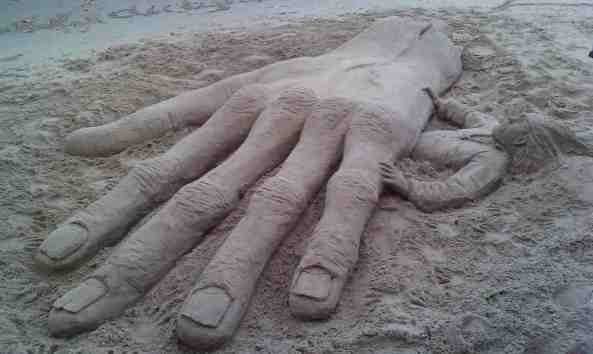 LLO: What’s been your favourite sand creation so far?
SA: The first time I built the largest sand sofa in the world was during the London Marathon a few years back. We did all the digging by hand and Dexter Fletcher even came down to lend a hand. It was massive and we sat on it right until the tide had surrounded us like a little island. There was so many tonnes of sand it took hours to wash away. 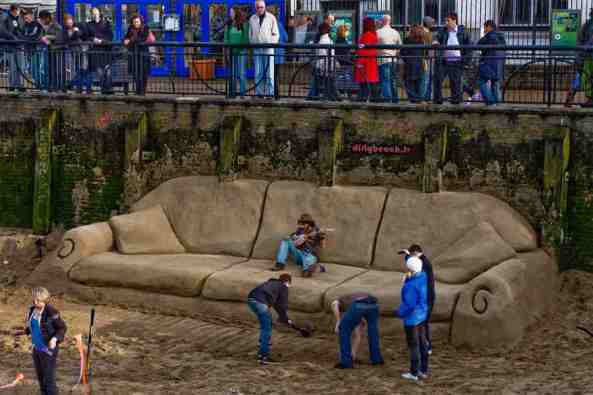 LLO: Did you let onlookers join in on the sandy fun?
SA: We put a shout out on on the local radio the day before the London Marathon saying we wanted help to set the world record. We ended up with hundreds of children helping, each doing a tiny bit of digging. It was great – I could not have done all that digging on my own. I love it when I inspire people to get creative. 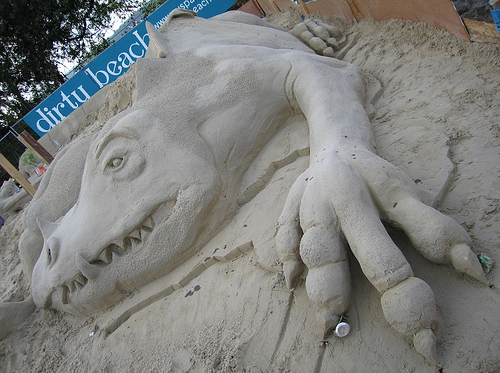 LLO: What’s the most unusual object you’ve found washed up on the beach?
SA: We find all sorts. I have often found syringes, condoms and horrible London rubbish, shoes and animal bones. The most unusual thing washed up with the rising tide had to be a frog. I’ve only ever seen one frog in my life hopping out of the Thames but this wouldn’t be so unusual unless it also happened to be the same day that I carved a giant frog in the sand. He hopped right up to the sculpture, an amazing coincidence.

If you go exploring at low tide you are guaranteed to find lots of old Victorian clay pipes, the sort they smoked tobacco with. There are hundreds of broken ones, but I once found one that was still usable. 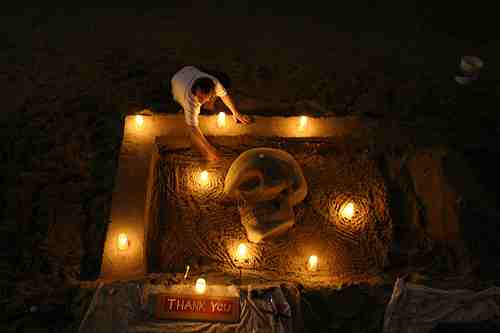 Knock knock / Who is there? / Europe….Ha ha, the punchline here is NO – YOUR A POO. <This is still directed at America.> 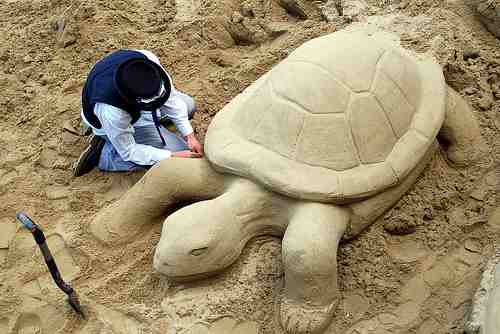 LLO: Favourite place in London to check out a good comedy gig?
SA: Come to the beach and do some heckling. It helps me through the day. I also like the 99 Comedy Club. They have a few venues all over town, but the most popular is in Leicester Square. It has some amazing acts and it is way cheaper then the Comedy Store or Jonglers. 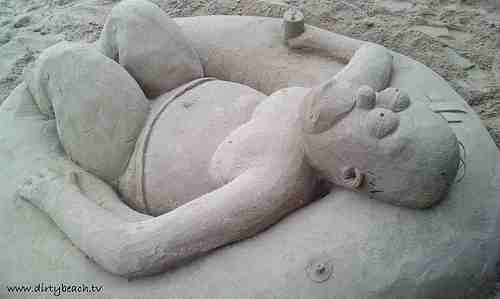 LLO: How else do you spend your time when the tide’s not out?
SA: I like to make music and I love cooking. I build sculptures at music festivals which keeps me busy in the summer, the sofa has turned into a sand stage. I have also been planning on opening a beach bar in the Bahamas. 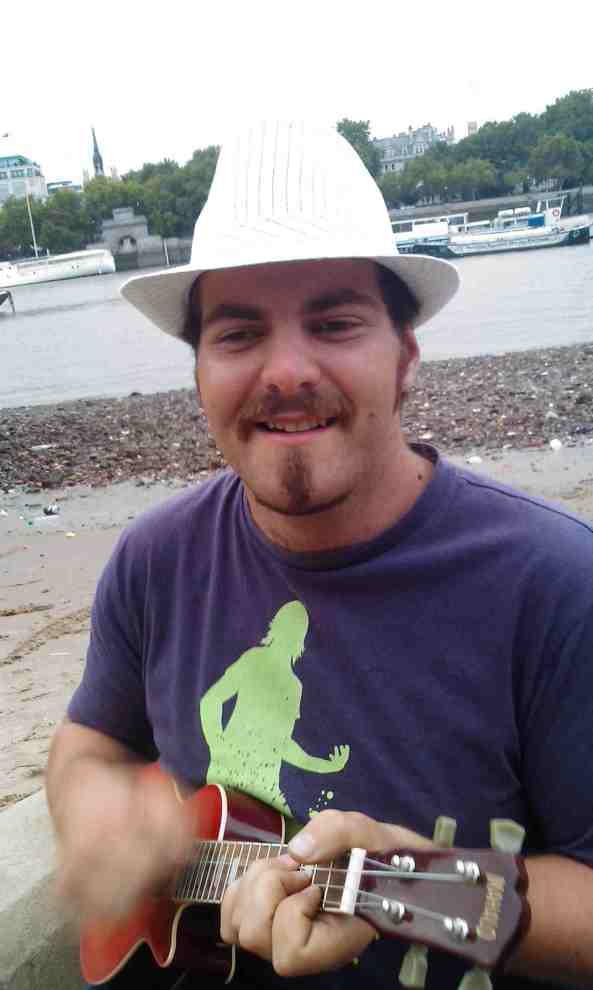 LLO: Tell us about something, someone or somewhere you’ve discovered in London that you think the rest of us ought to know about.
SA: Luc Valvona. This chap is so talented and funny. I build him a stage and he amazes the passing people. Some of his songs are quite rude, but if you don’t mind that sort of thing you will think he is amazing; you have to see him live. He made over £2,000 selling his album at a music festival in one weekend on my sand stage. He is going to be a star. He plays the majority of the tunes on our dirtybeach music album. It’s called Monster and you can see the music videos on my site dirtybeach.tv

All album sales go towards helping keep the beaches of the world clean. 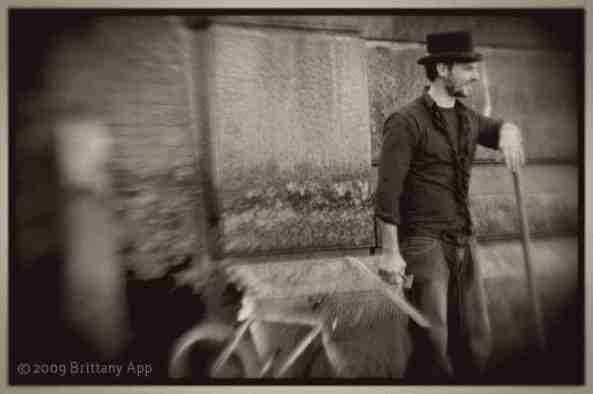 For more of Andy’s work, see the Dirty Beach website or check out his Flickr set of London beach pics.

London doesn’t have a beach, you say? I bet the dirtybeach.tv guys building sand sculptures down on South Bank beg to differ. They certainly make good use of the little strip that shows itself when the tide washes out. There’s a whole team of sculptors creating makeshift sand TVs and dragons and faces, having bonfires or sitting down on the newly-erected sofa in a top hat with a banjo and a can of beer, just chillin. They’re down there all the time so catch them whenever you like. With all the sun and shadows, it was difficult to get good pics, but here’s a few photos from last weekend to start it off. If you’ve got some of your own, add ’em to the Flickr pool.