Everybody loves a good secret, and by the looks of the photos on their website, Rebel Bingo is one that you’ll want to spread. It’s not really just bingo, you see; it’s a night of chaos. It’s a growing phenomenon in London, Bristol, Manchester, Brighton. It’s even headed over to New York pretty soon.

The Underground Rebel Bingo Club founders claim it’s better than sex, so I got in touch with rebel Freddie Fortune to give us all the juicy details.

LLO: So, what exactly is “rebel bingo” then?
FF: It’s the most hardcore form of bingo. It’s addictive. It’s in your face. It makes your heart beat faster; it sets off explosions in your brain; it makes your ears bleed and your eyes pop out… but you’ll like it.

LLO: How did you get involved?
FF: A year ago we were throwing parties in a church hall. At the end of the night we would hang out in the basement. We found a bingo kit stored there, and one night we started messing around with it. We knew it was wrong, but it felt good. Things got out of control, and it ended up as a mental bingo party. We called it The Underground Rebel Bingo Club.

We wanted more people to feel the way we were feeling. We moved the club upstairs to the church hall. It went mental. People were dancing on tables, screaming and drawing on each other. Hundreds of people started turning up every week, but we still had to hide what we were doing from the church the whole time. Eventually we got rumbled by the church warden and we got kicked out of the hall. But we couldn’t let it stop. So we didn’t. 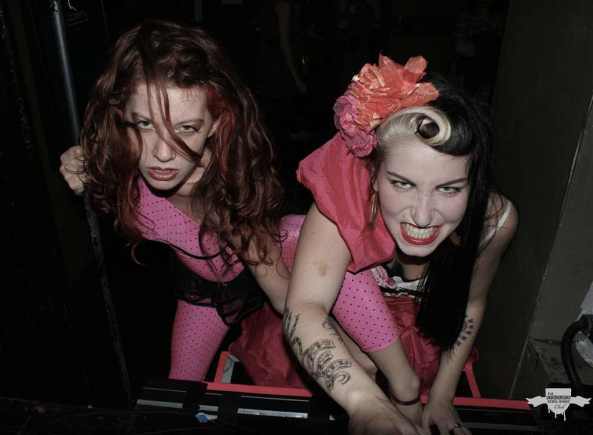 LLO: You say it’s “better than sex” and “better than real life”. Would you give up a lifetime of sex for a lifetime of rebel bingo?
FF: Yeah, but even if we agreed to that we’d still have sex and not tell you because we’re rebels and that’s the kinda stuff rebels do.

LLO: Why so super-secret?
FF: Because it’s dangerous and addictive and authorities are after us and you can’t just have any old people experimenting with rebel bingo because not everyone can handle it.

LLO: Give us one last bit of tweet-sized persuasion to show up on the 31st.
FF: One person will walk away a World Champion and become an underground legend; everyone else will have the night of their lives.

The Underground Rebel Bingo World Championships are happening on 31st July under the super secret guise of Global Banking & Finance Convention. Pop over to www.rebelbingo.com to snap up your tickets.

Part of the newly-rebuilt end of the maze that is Camden Market, London.